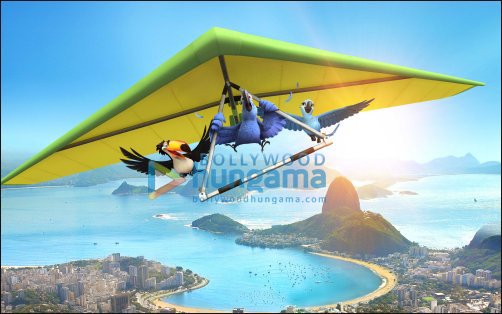 Hollywood movies with a B-town 'tadka' have always excited the Indian audiences and this time they will be treated to an extraordinary experience as Fox Star Studios have roped in a host of Bollywood actors for their upcoming 3D extravaganza Rio.

Rio is a 3D animation film directed by Carlos Saldanha of Ice Age fame. Set in the magnificent city of Rio de Janeiro and the lush rainforest of Brazil, the comedy-adventure centres on Blu, a rare macaw who thinks he is the last of his kind. When Blu discovers there's another - and that she's a she - he leaves the comforts of his cage in small town Minnesota and heads to Rio.

Fox has roped in Bollywood's favourite comical jodi Ranvir Shorey and Vinay Pathak to dub for the characters 'Nico' and 'Pedro' (Blu's friends) respectively in the movie. Another bonus for the viewers will be the especially composed Hindi songs sung by Shaan in his magical voice, making it a wholesome family entertainer.

Mr Vijay Singh, CEO, Fox Star Studios India says, "The spectacular 3D visual effects and exciting story line of Rio will be a treat for film enthusiasts; and to make this adventure even more exciting for Indian audiences we have roped in talented artistes like Ranvir Shorey, Vinay Pathak and Shaan. We are sure they will add their own charm to the amusing characters and take the experience of this film to a whole new level!"

After SRK lent his voice for The Incredibles in 2004, Rio will be the first Hollywood movie to get on board a host of B-town personalities for the different comic characters of the movie.

With voice-overs from renowned actors like Anne Hathaway, Jesse Eisenberg, Will.I.Am, Robin Thicke, George Lopez & Tracy Morgan, the film is touted to be one of the biggest Hollywood movies this year.

Rio is slated for a simultaneous worldwide 3D release on April 8th. In India, it will be released in English & Hindi.