Karan Kundrra and Tejasswi Prakash recently attended the star studded bash of Vanessa Walia, a popular producer. The party also saw several other celebrities like Arjun Bijlani who came in with wife Neha Swami, Mouni Roy, among others. While the actors bonded with each other and having fun, a video that captured everyone’s attention was this lovey-dovey one with the popular TV couple. 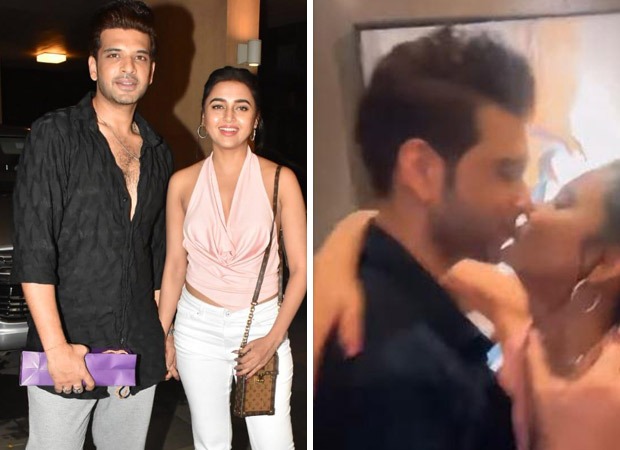 Readers would be aware that Karan Kundrra and Tejasswi Prakash made headlines with their chemistry ever since their Bigg Boss days. The two actors have always been open about their relationship and they also post several cute couple reels and photographs together. In fact, they never shy away from posing for the paps either. The lovely couple also entered the bash together by warmly greeting the media paparazzi outside. Later, the party shenanigans were posted by all of them on social media. And this particular video was posted by none other than the birthday girl Vanessa Walia.

The video in question features Karan Kundrra and Tejasswi Prakash getting all romantic as the actor gives her a quick peck on the lips. However, the actress is caught unaware on camera and expresses in the video that she was unaware that it was getting recorded. But this fun banter and romance leaves birthday girl Vanessa with a smile. Here, have a look:

Tejasswi Prakash and Karan Kundrra recently also appeared in a dance reality show hosted by Karan Kundrra and their onscreen romance needless to say went on to gather a lot of attention from TejRan fans. Needless to say, this one will truly be a treat for the ones who are rooting for the TV couple.

On the other hand, there were multiple other videos from the bash that made it to social media including one where Karan Kundrra and Arjun Bijlani are singing the song ‘Yeh Bandhan Toh’ from their namesake film, Karan Arjun.