After returning from a fun-filled Maldives vacation with wife Katrina Kaif, Vicky Kaushal too has dived into work like his better half. The actor was recently seen at the reading session of his next, titled Sam Bahadur, which is inspired by real life events. The photos were shared by his film’s co-star Fatima Sana Shaikh, who will also be seen alongside her Dangal girl Sanya Malhotra for this film. 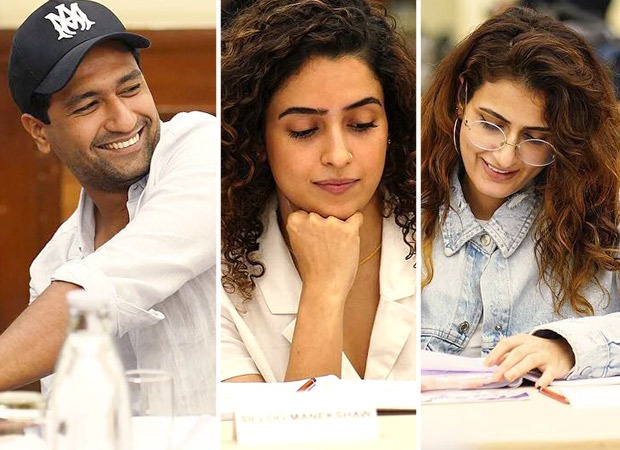 Fatima Sana Shaikh took to Instagram to share a series of photos from the reading session of Sam Bahadur. While the first photo featured her solo image as she seemed focused on work with her glasses on, her other photos included pictures of co-actors Vicky Kaushal, Sanya Malhotra, and also one with director Meghna Gulzar and producer Ronnie Screwvala. She also shared a photo of the entire team having an intense discussion and seemed engrossed in work. She captioned it saying, “Reading together, a story we are honoured to tell. Of a Soldier and a Gentleman. Our Samबहादुर @meghnagulzar @vickykaushal09 @fatimasanashaikh @sanyamalhotra_ @ronnie.screwvala @bhavani.iyer @ishantanus @maharrshshah @rsvpmovies

Coming to the film Sam Bahadur, the film is based on the life of Field Marshal Sam Horsumji Framji Jamshedji Manekshaw, who was the Chief of the Army Staff during the Indo-Pakistan 1971. His career spans over four decades as he began his service in the British-Indian Army during World War II. The film will feature Vicky Kaushal in the titular role along with Sanya Malhotra playing the role of his wife Silloo and Fatima Sana Shaikh essaying the role of Indira Gandhi. Produced by Ronnie Screwvala, the film is written by Bhavani Iyer and Shantanu Srivastava.