Last night, Zee Cine Awards were held and it indeed was a starry night. The celebs put their best foot forward when it came to fashion and the performances. A lot of actors took the trophy home and were all gushing about their latest win. With the awards season in full swing, a lot of inside videos and pictures turn up during the event. One such picture of Varun Dhawan and Madhuri Dixit was posted by Varun himself who couldn’t help fanboying over the fact that the ‘Dhak-Dhak girl’ appreciated his performance. 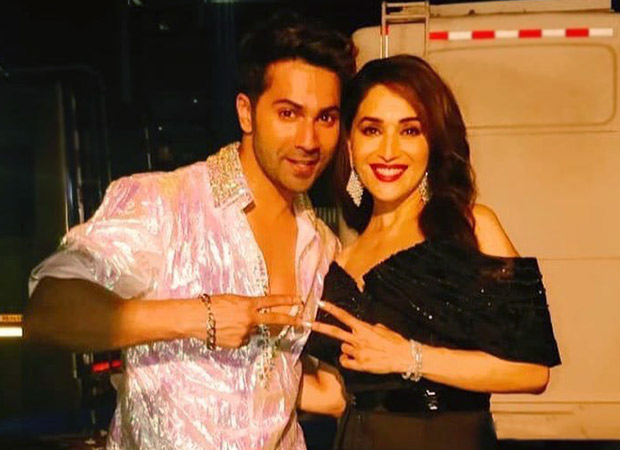 Madhuri Dixit has had some grand stage performance during the award shows and is considered the epitome of beauty and grace for all the right reasons. Varun, on the other hand is a powerhouse performer who emits nothing but energy with his performances. We are always left wondering how he manages to keep up his energy intact. His dance moves always leave our jaws dropped and he manages to steal a lot many hearts with his performances. After his performance at the awards last night, Varun took to his Instagram for he couldn’t contain his excitement after Madhuri was all praises for his performance. He uploaded a picture with the gorgeous actress saying, “The only nod of approval needed after a live stage performance @madhuridixitnene #blessed baki sab first class hain ???? #kalank”

He was seen performing on the upcoming track, ‘First Class’, from the movie Kalank. You know how they say dreams come true, they’re right because VD’s dream came true when he got the opportunity to work with Madhuri in the period drama Kalank. The movie is a multi-starrer and has already broken the record of being the most watched Hindi movie teaser on YouTube with over 26 million views in just 24 hours.