Last Updated 20.10.2021 | 8:52 AM IST
feedback language
follow us on
Bollywood Hungama » News » Bollywood Features News » “Until, we meet again!” – BTS conclude MAP OF THE SOUL ON:E with gratitude and love

Two days and 23 songs on each day - that's what you get when you see BTS perform! Global superstars put up two grand concerts during the MAP OF THE SOUL ON:E weekend and concluded the weekend on a high note with a lot of positivity, love, and hope that they will meet the fans in the future. 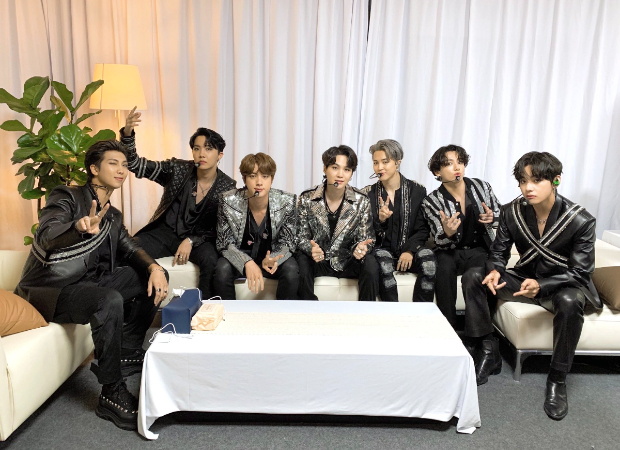 The second day of BTS' virtual concert MAP OF THE SOUL ON:E kicked off on Sunday, October 11 (12:30 pm IST). The setlist was pretty much similar to the previous day with different songs being performed during the encore stage. But, the seven members were more relaxed and happier to be on stage and consume all the energy via virtual experience. The concert ended with moving ending statements that left everyone emotional.

J-Hope said it was the happiest day to be on stage, perform with members, and see the ARMYs virtually. "Being the last day of our concert, I feel quite emotional and happy," he said (via @btstranslation7). "It feels really good to have worked hard to prepare for this. it’s so fascinating - it really feels like you all are here with us right now! Thank you so, so much. there’s been a lot of encouraging news these days, and our album is coming out soon. Even in a situation like this, we’re always trying our best to plan and move with the situation to show you [our best selves] and work hard for you. So please continue to look forward to what’s ahead for us, and I just want to tell you all that you all mean so much and your energy is a driving force for us! Love you."

On the previous day, Jimin was emotional but on Sunday, he ensured everyone that he was happier than ever to be able to perform and showcase everything. "I won’t cry! I think it was enough to have cried last night," he chuckled (via @btstranslation7). "The members teased me so much yesterday. I’m so happy & grateful to the ARMY, even behind screens, that we could hear your voices and see you. Hearing your cheers is the most beautiful sound for us, it’s our strength, and our everything - it’s what we work and live for."

He further said. "I first heard your cheers at the Olympic gymnastics arena. I remember saying, hearing 'that sound is something only artists can experience'. Though you all aren’t here, in front of our eyes right now, I’m so glad we could hear your 'sound' today.  I hope our 'sound' can be conveyed to you all. I was so, so happy today and we’ll prepare to come back to see you again. Thank you much! I love you so much." 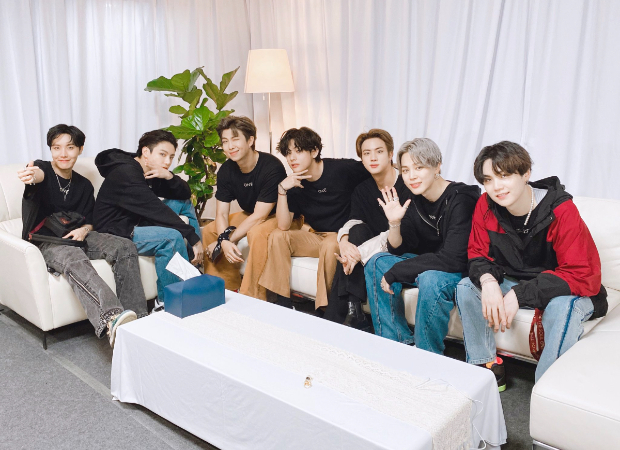 RM, the group's leader, addressed everyone in English and once again, delivered an inspiring speech. "You know what? I’m happy. I’m so happy. I’m literally so happy," he said. "I have no religion, but I thank God we’re living in 2020. I thank God that we have this technology so we could be connected with no latency  And you know - we have those 6-7 years. You know, we’ve been to America, Asia, we’ve been to everywhere, and we saw faces, we felt our energy, we charge each other’s batteries, we literally did all those kinds of things, and I believe in those years and that time, + you know, that belief and that energy we built together will never betray us. So I’m happy and I hope you could smile and feel it, feel the same, the vibe that we’re doing now together. I hope you’re happy. Stay safe. Thank you very much. I love you."

The youngest one of the group, Jungkook, recalled the conversation he had with RM after the first concert wrapped up on Sunday. "I was talking with Namjoon hyung (older brother) yesterday. Corona is something that from the moment we were born, till the day our lives end should never have been in our lives.. but had COVID come to us 3-4 years ago, would we still have been able to perform for you, online, today?" he said (via @btstranslation7). "I took some time to think about whether we would have been able to see each other from different parts of the world like this."

Expressing his gratitude towards everyone and how we are in times like these where they could see the fans virtually. "I felt really thankful that with this technology, we can see each other face to face & hear your cheers, even from places far away. How could we not be upset that we couldn’t see you & hear your cheering in person? For both you and us. But, at this moment, I really feel thankful, and I received a lot of healing. Performing yesterday and today gave me a sense of relief as a performer, gave me hope. I just feel so happy right now, and in our work going forward, I think we can move forward, step by step, energetically & happily. thank you for watching us, and please continue to make precious memories with us. Thank you for your love and support. We purple you~ you know it?" he signed off. 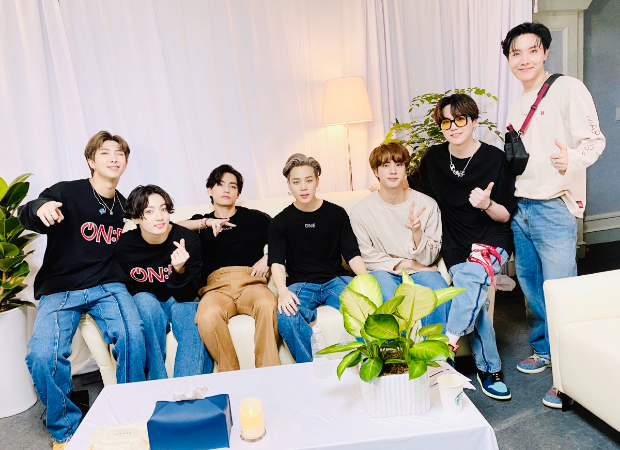 The eldest one of the group, Jin, reflected on how they had been hustling hard on this particular setlist since last year and how they only got to perform it twice. "For me, to tell you the truth, I feel quite saddened. We’d been preparing this setlist since last year, and had it gone to plan, we were to perform, traveling the world this year, but it’s unfortunate we only had the chance to perform the set twice, it breaks my heart," he told the fans who had been watching the live-stream across the globe.

"Having to see our ARMYs only through the screen is quite sad, and as I said when I spoke with the members yesterday, the energy and vibes we get from a performance are completely different from how it feels to see you through a screen. But, as they say, even when bad things happen, good things will surely come next. They always do.
I believe the next time when we meet again, we will be two, three times as happy and have two-three times the fun! Till the day we meet next, let’s be healthy. I love you," he concluded his speech.

Suga, earlier in the day, addressed that they had shoulder pain but was doing well. During his speech, he revealed they had gone back to watching the Break The Silence movie to see the stadium tour. "Yes, ah...especially while preparing for this concert, we watched 'Break the Silence'. Our stadium tour was shown [in the movie], and it really seemed like a dream. Really, it hasn't even been a year since [the tour] ended, but having an audience in there like that was really...to the point where I thought 'is this real?' lt just goes to show that I've already gotten used to this situation," Suga said (via @STUDIO_0613).

"Just like what the members said earlier, I'm feeling thankful that because of such good technology, we are able to do a concert like this and you all are able to see our concert through the screen. Especially, as you may know, the global concert industry is really having a tough time," he continued. "Not only us, but all singers, people who prepare the stage onsite, and several staff members, everyone - despite being in such a difficult situation in this current state, I'm feeling thankful that we're able to do a concert like this. It is a shame, it is, but there's nothing we can do about it."

"We've prepared what we can and because you all, who are watching this, are enjoying it, I feel quite thankful for that. I think this is a moment in which I've come to like/enjoy and love music and the stage a bit more, as it was a moment in which I felt once again that I am a person who does music and stages while preparing and doing [this] stage/performance. Everyone, really, be healthy until this situation ends, and we don't know when we'll be able to meet again, right? So until then, really firmly/strongly prepare yourselves. We'll come to you with an even grander/more amazing stage next time, everyone. Thank you," he concluded his moving speech.

In the end, V took the center stage to express his gratitude towards fans. "ARMYs, ARMYs? Be honest - you're happy to see us, right? Honestly, we almost weren't able to do this concert either. But luckily enough, we were able to do it," he said (via @STUDIO_0613). "I'm so thankful that we were able to do it right now, and I have a person I miss - Bang Sihyuk Chairman! Really, thanks to you, you made a way that allowed us to do [this concert] so Sihyuk-hyung Big Hit Entertainment Chairman), thanks so much."

"First off, [after] today and yesterday, the concert is coming to an end, but I honestly don't think that this is a concert we did with ARMY. I think I'll only be waiting for the day I can meet ARMYs after getting ready by gathering even more strength and working harder. Although we went on [making] great memories today as well if only the day I can meet ARMY comes, how should I say this 'I can spend the entire night walking from Seoul to Busan'," BTS members quickly teased V for his dream to walk with everyone but admired his passion.

"Yes, that's how much I feel this way - I wanted to tell you that. And really, it seems like I can't live without you ARMYs. I talked to and played with ARMYs on Weverse while we prepared 'Dynamite,' and I was so happy in those moments. So, let's make something we can do together again. Thank you and I really purple you and I really love you and ARMY, I miss you. Thank you," he signed off.

As MAP OF THE SOUL ON:E comes to a close, more music is coming from BTS! The septet will drop their studio album 'BE (Deluxe Edition)' on November 20, 2020.

ALSO READ: BTS’ MAP OF THE SOUL ON:E was a true testament to their artistry