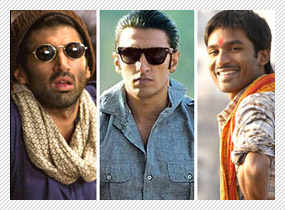 In Aashiqui 2, Aditya Roy Kapur's character drives himself to a drunken death at the end. The film was a blockbuster. In the haunting tragic hard hitting BA Pass, the young hero played by debutant Shadab Kamal dies a wretched horrific death at the end. And yes, in Lootera it is Sonakshi Sinha who is fatally ill. But it's Ranveer Singh who finally dies. Just the other week Dhanush in Raanjhanaa too came to a tragic violent end.


Suddenly why are so many of our heroes calling it a day almost every other Friday? In June, two releases on the same Friday Aanand L Rai's Raanjhanaa and Susi Ganesan's Shortcut Romeo, both end with their heroes breathing their last before the finale.


Coming up: a slew of films where the protagonists die at the end and the distributors are poised to laugh all the way to the bank.


In Sanjay Leela Bhansali's Ram Leela, the protagonists Ranveer Singh and Deepika Padukone are apparently killed at the end. This is not Bhansali's first film with a tragic finale. In Devdas, Guzaarish and Black, his male protagonists died at the end. And if reliable sources are to be believed, Akshay Kumar in Milan Luthria's Once Upon A Time In Mumbaai Dobara and the Big B in Prakash Jha's Satyagraha also perish at the end of the film.


Manish Tiwari's Varanasi-based take on Romeo & Juliet would also see the protagonists come to a tragic end. Tiwari feels the protagonists of every film come with their own destiny. "Each film undertakes a journey for different reasons," he argues.


However, according to Tiwari, the tragic outcome in the protagonists' lives is also a sign of the times. "In today's times when cynicism rules, it is very attractive to showcase stories of true love for the audience. And yet the authors of these love stories can't escape the harsh truth that true idealized love is an impossibility and have to settle for unhappy resolutions to the romance."


So are unhappy endings back in vogue?

Protests trade expert Taran Adarsh, "But tragic endings never went out of vogue! The biggest love story of all times Mughal-e-Azam had a sad ending. Later there were Ek Duuje Ke Liye and Qayamat Se Qayamat Tak. If one looks at Sholay, the Amitabh-Jaya track also had a tragic conclusion."


However, Taran agrees that tragic endings seem to be the flavour of the year. "Recently Aashiqui 2, has triggered off a trend for tragic endings. Now there is Raanjhanaa as well."


Writer Prasoon Joshi feels the grim side of life is inevitable to every individual's existence. "Tragedy is the reality for the majority. Sadness and dread are feelings we live with every day. Whenever tragedy is presented well it will connect with the audience."


Aanand Rai recalls how during a screening of Raanjhanaa at Chandan cinema in Mumbai, the gatekeeper accosted him pleading, 'Dhanush is not dead, right? He's only gone into a coma. He will be back in the sequel, right?' "I had to unfortunately break his heart and tell him there is no sequel and Kundan, the character Dhanush played, is gone. My hero had to die. That's the life I saw for him," says Rai.


Filmmaker Ananth Mahadevan feels tragic endings are frowned upon for fear of hurting audiences' penchant for a good time. "Tragic endings got a big boost from the success of K Balachander's Ek Duuje Ke Liye. But filmmakers shied away from tragic endings fearing public rejection. Although Aashiqui 2, Raanjhanaa and Shortcut Romeo happened to be released together, I don't think tragic endings would catch on."


Producer Ramesh Taurani refuses to see tragedy as a formula. "There is a never a formula for a hit film. Films with tragic endings do well because they're good films. Yeh Jawaani Hai Deewani has no tragic ending. And it's the biggest hit of the year. Content is king."