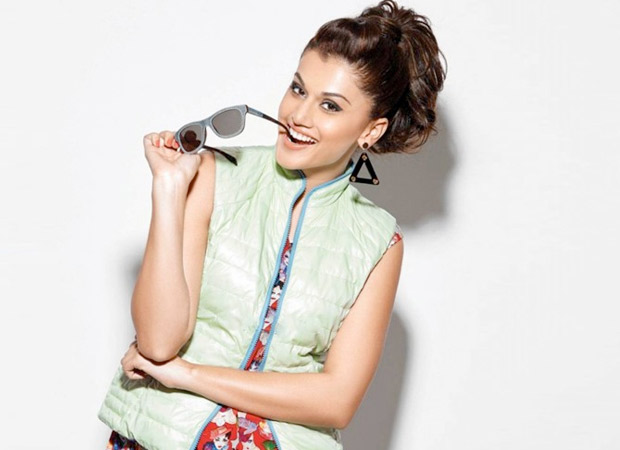 The extremely talented Taapsee Pannu, who wowed us this year with her intensely evocative performance in Pink, is all set to let her hair down with a light-hearted frothy comedic turn in David Dhawan’s Judwaa 2, the much-delayed sequel to the 1997 comedy that featured Salman Khan in the lead.

“I am totally looking forward to Judwaa 2” – Taapsee Pannu

The sequel, again directed by David Dhawan, who had directed the original, features the director’s son Varun Dhawan in a double role.

So, what made Taapsee Pannu do a romantic lead in a film, where the heroines Karisma Kapoor and Rambha had very little to do in the first place? This too, at a time when Taapsee Pannu is being praised to the skies for her intense performance.

Says Taapsee Pannu, “I am totally looking forward to this change of mood in my career. I needed a little bit of singing and dancing in my life and career. Judwaa 2 will be a change for me. The comedy genre will be a slight break from what I’ve lined up. I needed to feel like a typical Bollywood heroine for a change.”

Lest we forget, Taapsee Pannu began her career in Bollywood with a remake of Sai Paranjpye’s classic comedy Chashme Baddoor. The remake was directed by David Dhawan.

Smiling at that mirthful trot down memory lane, Taapsee Pannu says, “David Sir was one of my favourite directors from childhood. And it was my good fortune that I started my career in Hindi cinema with his Chashme Baddoor. I still dance like crazy on the songs of Judwaa. It’s been three years since Chashme Baddoor and people need to see yet another side of me.”

Taapsee Pannu is looking forward to working with Varun Dhawan on this project. “He is fun and a fine actor. Someday, I’d also love to work with Salman Khan, who was in the original Judwaa.”