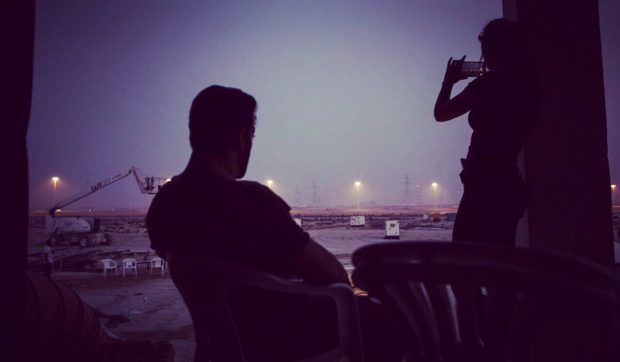 Salman Khan and Katrina Kaif are currently on the last schedule of their action romance drama, Tiger Zinda Hai. While they are on the last days of the shooting, director Ali Abbas Zafar is making sure to keep the fans engrossed in their upcoming film by giving them some sneak peeks.

After revealing the whereabouts of the shoot in Abu Dhabi, Ali Abbas Zafar shared a lovely photograph of Salman Khan who is a bit lost while gazing at Katrina Kaif, who is capturing the beautiful sunset. He captioned it as, "Tiger watches as Zoya captures Sunset @TigerZindaHai #behind the scenes, last few days of shoot :)"

Tiger Zinda Hai stars Salman Khan and Katrina Kaif in the lead roles. The film is a sequel to Kabir Khan‘s Ek Tha Tiger that had released in 2012. Directed by Ali Abbas Zafar, the film is set to release on December 22, 2017.

After wrapping up Tiger Zinda Hai, Salman Khan will begin shooting for Race 3 which will be helmed by Remo D’Souza. Katrina Khan, on the other hand, will resume shooting for Thugs of Hindostan which is being helmed by Vijay Krishna Acharya.