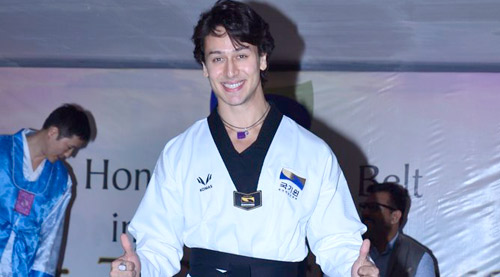 Very much so! Especially since this is an organization established by the South Korean government. It's a very special honour because before me it was given to Shah Rukh Khan Sir and Akshay Kumar Sir. I am so new and so raw compared to them, and yet they thought me worthy of the honour. Wow!


You may be new but your martial arts skills are that of a veteran?

I am trying. I've been a disciplined student of the martial arts from my childhood. To me the discipline required to practice the martial arts is not just about spending time practicing my moves. It's a whole way of life. My discipline extends to how I live my entire life. I like to wake up early in the morning and go through the day in a disciplined way. More than that, I like to keep my thoughts free of negativity and clear of ugliness. To me that's real self-discipline.

Some would say you are way too restrained for your age?

You mean I am boring? Ha ha. So be it. I'd rather be true to myself and not let down my parents than live up to an image of someone who is hot and wild. That would be lying to myself. It's very important for me to be truthful in what I do.

Yes, he is in many ways, the opposite of me. He is....what's the word...bindaas, oblivious to all forms of social restraint. He has agreed to listen to me finally, but only because he needs to get into shape for his role of the boxer in the Hindi remake of Warrior.

Apparently you will be seen taking your stunts to the next level in your second film?

Yes, I am again teaming up with Sajid Sir (producer Nadiadwala) and Sabbir Sir (director Sabbir Khan). This time we've to take the action further than Heropanti.

Is the post-debut film scary for you?

I'd say the second film is as important, if not more important than the first film. Yes, it has to work. Otherwise people would brand me a fluke or a one-film wonder. Worse, critics would say audiences went to see my first film because of my father. I wouldn't want to live in my father's shadow.

Do you think you have improved as a performer since your first film?

That we'll only get to know once the second film releases. I know I've a long way to go. I look at Hrithik Sir as my role model. When I see him on screen I feel motivated. That's the kind of personality and performing ability I'd like to develop.