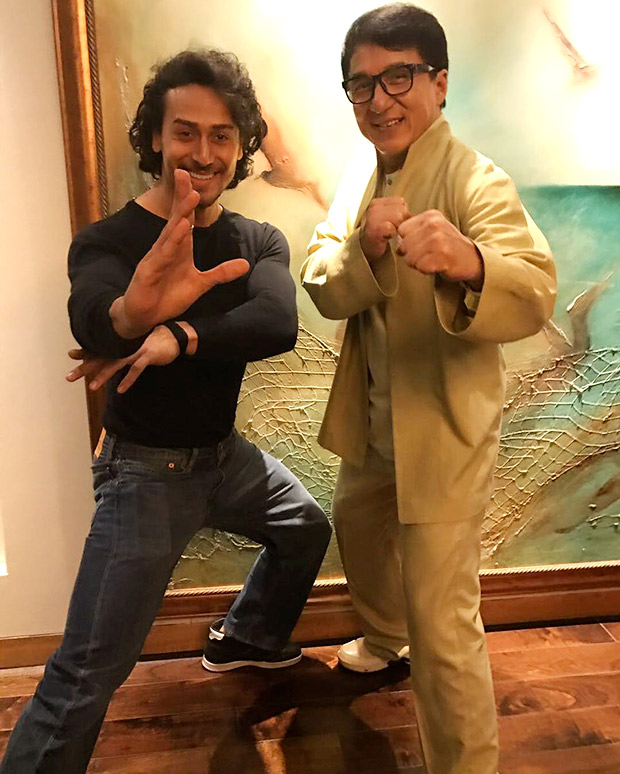 Just a day ago, we had reported that Tiger Shroff has taken his love for Mixed Martial Arts to the next level by co-owing a team at the Super Fight League. And amongst his list of dance and action idols, if there was one name that he often spoke about, it was that of Jackie Chan.

And Tiger Shroff soon got an opportunity to fulfil his fan moment, courtesy, the Indo-Chinese film Kung Fu Yoga which stars Jackie Chan in the lead role. For the promotions of the same, Jackie paid a visit to India yesterday, amidst the chaotic and hectic schedule. While the event was hosted by his Kung Fu co-star Sonu Sood, during his visit, the global superstar also met several other Bollywood celebrities.

Tiger Shroff was obviously super excited to meet Jackie Chan and shared a picture with him on social media with a cute post saying, “Yesterday my life came into a full circle. The reason i do what i do. After meeting him i realised theres so much more to earn n learn in life. #livinglegend #jackiechan.”

On the Bollywood front, Tiger Shroff is currently busy shooting for Munna Michael, after which he will shift his attention to Baaghi 2. The actor has also signed the starry sequel to Student Of The Year.

On the other hand, Kung Fu Yoga, directed by Stanley Tong, stars Bollywood names like Disha Patani and Amyra Dastur, besides Sonu Sood. The film is slated to release on February 3.