Janhvi Kapoor seems to have gone on a nostalgic mode today as she reminisced her childhood days and childhood buddies. Hailing from a filmy family, the star kid has had some friends from the industry and one of them who have remained with her throughout is Tanisha Santoshi, daughter of filmmaker Rajkumar Santoshi. The two of them continue to retain their bond even today and we recently found a snapshot of the girls on Instagram recently. 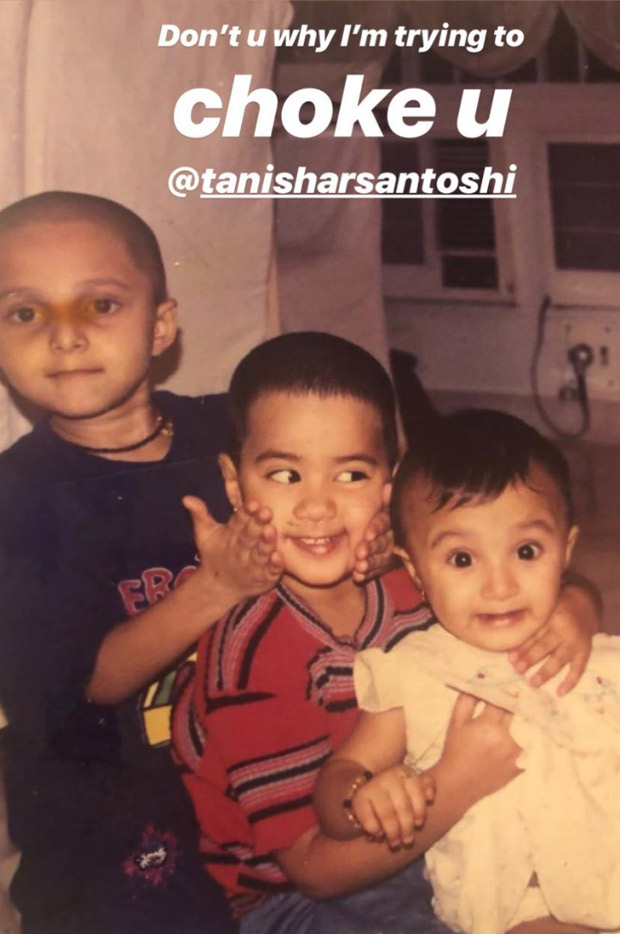 Janhvi Kapoor shared a picture, visibly from her childhood album, where she is seen with Tanisha Santoshi as her Instagram story. In the picture, the actress is sitting right behind Tanisha and it looks like she is trying to strangle her. Adding a caption, Janhvi posted on the picture saying, “Don’t u why I’m trying to choke u.”

Tanisha has also spoken about Janhvi during the Koffee With Karan episode wherein she spilled some beans about her childhood friend. Moreover, in a recent work trip to Barcelona, Janhvi was all set to kick off shooting in the picturesque Spanish location. There, she was accompanied by her sister Khushi Kapoor and Tanisha Santoshi. The picture of the trio sporting chic fur coats and shorts with knee length boots had gone viral on the internet.

On the work front, Janhvi Kapoor will next be seen in the Mughal drama Takht starring Ranveer Singh, Alia Bhatt, Vicky Kaushal, Bhumi Pednekar, Kareena Kapoor Khan and Anil Kapoor. She will also be starring in the Gunjan Saxena biopic. While there are reports that she will feature in the Tamil remake of Pink, there are also rumours that she will feature in a film alongside Varun Dhawan.