After making a name in Bollywood, Suniel Shetty has now turned his attention towards South films. Fondly known as ‘Anna’, he will not only be entering into different languages with films like Marakkar and Darbar but Shetty will also making his debut in his own mother tongue Kannada with the film Pailwaan. He will be seen alongside Sandalwood superstar Kichcha Sudeep. 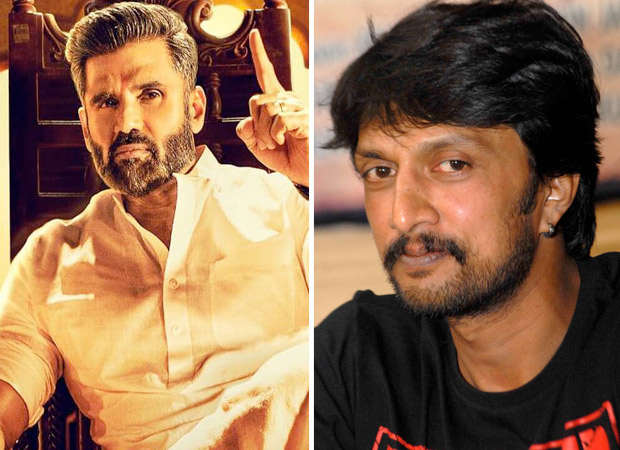 Kichcha Sudeep who has featured in Hindi films like Rann and Phoonk 2, will soon be returning to Bollywood with Dabangg 3. And now, Bollywood’s Anna Suniel Shetty is planning to explore the Sandalwood industry and set his foot there with Pailwaan. Recently the first look of Suniel Shetty was revealed by the makers wherein the actor is seen white dhoti and shirt. Playing the role of Sarkar, he is looking every bit powerful! He posted the first look from the film on Instagram and other social media platforms.

Hey guys happy to showcase the first look of my first Kannada film #Pailwaan with the brilliant @kichchasudeepa directed by #SKrishna & an amazing crew! Thank you for making me feel at home ! Looking forward to working with you again! #newposter #film

It seems that Suniel Shetty is winning hearts with his new look from the film. As celebrities from Bollywood are already gushing about it and congratulating the actor, his co-star Kichcha Sudeep too took to Twitter to express his happiness over the first look. Expressing the same, he said, ‘U r a delight to have on set n to be close to in person.... Mch mch luv n always happy to be sharing th screen again @SunielVShetty Anna.”

U r a delight to have on set n to be close to in person.... Mch mch luv n always happy to be sharing th screen again @SunielVShetty Anna.
???????? https://t.co/Rcmx8BEPeJ