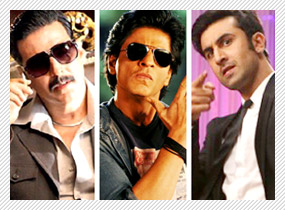 The Rs. 100 crore target can be reached faster if exhibitors decide to hike ticket prices, as was the case with Once Upon A Time In Mumbai Dobaara, Chennai Express, Yeh Jawaani Hai Deewani, and Race 2. But exercise caution, warn trade experts lest the steep prices turn away the patrons.

Hiking the price of cinema tickets for high profile films or for those releasing during festival seasons is not exactly new, but the frequency with which it is done has gone up recently. Trade analyst Amod Mehra recalls the release of filmmaker Vidhu Vinod Chopra's 1942 A Love Story, starring Anil Kapoor, Jackie Shroff, Manisha Koirala, in 1994. "I remember Mumbai's Metro cinema upping their balcony ticket from Rs 50-75 for the film. But when the multiplex culture took off, Ghajini hiked its ticket price and restarted the trend," he says. Sanjay Dalia, President Cinemax India Ltd, also recalls Mumbai's Satyam theatre hiking their prices in 1993 with the Sanjay Dutt- Madhuri Dixit starrer Khalnayak and Shah Rukh Khan's Dilwale Dulhaniya Le Jayenge in 1995. "Earlier, it was a trend to hike the price of cinema tickets during Diwali. Today, ticket prices don't just go up during festivals like Eid, Diwali and Christmas, but also when a film features a big star. Like in the case of Chennai Express, which was released on the day of Eid and had Shah Rukh Khan as its hero. Considering the holiday and a star like Shah Rukh, whose last release was Jab Tak Hain Jaan last Diwali, we were confident of getting an audience despite the hike. Chennai Express was the highest raise this year and primarily the reason it touched the Rs. 100 crores in the first weekend. Once Upon A Time In Mumbai Dobaara prices were also raised, but the per cent of the raise was lower than that of Chennai Express, it being an action film," states Dalia.

Indeed it was a bonanza for theatre owners as Chennai Express saw a steep rise in tickets as much as over 50 per cent at some multiplexes."There is no restriction from the government on the ticket hike. Also the hike is not across India, as we exhibitors do not want to scare our patrons away with high prices. So everything is weighed carefully - from the buzz of the film to the actor, director and things like the location of the release. We are always in touch with our theatre managers to know the response to the hike and if need be, lower the price accordingly. But this hike is not applicable to every film. The only films which warranted a price hike before Chennai Express this year were Race 2 and Yeh Jawaani Hai Deewani, but the hike was not as much as Chennai...," explains Dalia, adding that ticket prices in multiplexes are flexible as rates vary not only for weekdays and weekends, but from show to show. "Ticket rates are also slashed during slack periods like exam time and pre-Diwali season, so an increase at the time of a big budget release is justified. In the forthcoming films, Krrish 3, which releases on Diwali and has a big star like Hrithik Roshan and Dhoom 3, which has Aamir Khan and releases on Christmas, will fall into the category of Chennai... Besharam too can be counted as a big release as Ranbir is now in the big league," elaborates Dalia.

But who, among exhibitors, distributors and producers, decides a hiked price? While distributor Anil Thadani says that it is a consensus between the three stakeholders, Dalia states that it is the exhibitors who have the final word on ticket pricing. Corroborating Dalia's view, single screen owner Manoj Desai of Mumbai's single screens G 7 and Maratha Mandir, states that he refuses to hike ticket prices whatever the season, whoever the star in the film and whatever the pressure from the distributor. "Ticket price hike is every theatre's individual policy. The government also has laid no restriction in this issue as they benefit from the increased entertainment tax. I wouldn't like to comment on multiplexes, but we have released so many big films over the years and have always stuck to our ticket prices. I would rather see a housefull board than a half empty hall," he says.

Even if single screen theatres decide to hike ticket prices for a big film, it would be nominal "At times there is pressure from the distributors to hike prices, but we have to be make sure that people keep coming to watch the film. We recently priced our tickets to Rs. 120 and decided not to raise it further for Chennai Express. But I believe other single screens like Eros, Regal and Excelsior raised ticket prices for the film," says Rakesh Sippy of Mumbai's Chitra theatre.

With Chennai Express having garnered Rs.100 crores in the first four days of release, one thing is for sure, no ticket price, however steep, can deter the audience if they wish to see a film!