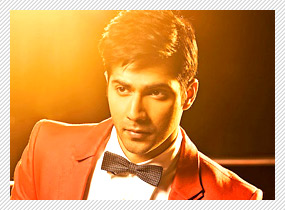 Main Tera Hero (MTH) is a success and you now seem to have fans in all age-groups?

Very honestly the hero this film is my father David Dhawan. We promoted the film like crazy. Nowadays the pressures on an actor on how to market a film are excruciating. There wasn't so much pressure to promote my first film Student Of The Year (SOTY). Dharma Productions was the hero of that film and Karan Johar was there with the three of us, Sidharth Malhotra, Alia and me to promote the film. Karan made sure everything went right. He was the karta-dharta of SOTY, with MTH the pressure was fully on me to sell the film to the audience.

Couldn't have been an easy place to be in?

There were times when I had to force my eyelids apart. But when I saw those expectant crowds at the promotional events just waiting for a glimpse of the actors, one couldn't go in front of them all droopy and tired.

The hallmark of a true star?

Very honestly I wouldn't call myself a star. Not now, not ever. I am here because I love the movies. I am not here to make money. By God's grace I don't have to worry about my next 4,000 meals. At the same time, I am not here to do charity either. But my relationship with the audience will always be more important than all other considerations. I've to make sure of that.

You seem to have established the same kind of connect with the audience as Govinda did in your father's films. Does that comparison annoy you?

Not at all. If anything, it is unfair to an actor of Govinda's stature and durability. At the same time I do realize that all newcomers are compared with established actors. And because MTH is a full-on David Dhawan film, the kind that my father did with Govinda, the comparisons are inevitable. MTH is very different from its source of origin the Telugu film Kandireega. The style of storytelling and packaging is full-on David Dhawan.

You have caught the sur of David Dhawan's cinema bang-on?

I had to. Otherwise I'd have been thrown out of the film. He was very strict with me during the shooting. Out of the 60 days that we shot MTH, I was on tenterhooks for 45 days.

Did that bother you initially?

Yes, it did. Not that I expected to be pampered. But I expected to be treated normally. But he was being extra-strict with me. Now when I see the film I realize why he behaved the way he did. My father has 42 films behind him. He knew exactly what he was doing and why he needed to make sure that I worked harder than all his other heroes. He just threw me in the deep end of the water and let me learn to swim my way out. Either I swam or I drowned.

Where do you get all this energy from?

It's not me. It's Seenu, the guy I play in MTH. I asked my dad where he gets the energy from. Dad gave a very nice answer, 'Yeh Seenu raat ko jaldi so jaata hai.' Seenu doesn't drink, doesn't smoke. Dad and I created a full back-story for my character. We imagined Seenu as being compulsively happy. And when he cries he makes a certain kind of noise. That is a sound I got from my dog Angel.

The doggie noise was your idea?

Yes. There was a lot of give-and-take of ideas between me and dad. And why just Dad? I even had a terrific interactive relationship with Anupam Kher. On the very first day of shooting Anupam and I struck a rapport when he took me aside to work out our scenes together. In fact I struck a fabulous rapport with every co-star. Even Rajpal Yadav Sir is so talented. I learnt a lot from him.

You come from a totally filmy background. Is that an advantage?

I am not too sure. Today the sur of cinema has changed beyond recognition. Things are gradually changing. We don't know whether the future of Indian cinema is going to be Dabangg, Rowdy Rathore and Main Tera Hero or is it going to be Queen and Lunchbox...we don't know.

Which cinema would you rather be part of?

I am greedy. I want to do both. The sur of acting is so different in Main Tera Hero and Queen. I am doing the more naturalistic sur in Humpty Sharma Ki Dulhaniya. It's a very real film. I play a working-class Punjabi guy. I feel very thrilled about this film. I feel as an actor I should explore everything there is to explore. I am consciously choosing roles that are different from one another.

In Humpty Sharma... you've Alia Bhatt to inspire you?

I always find some source of inspiration in all my co-stars. In MTH I've done scenes with God as my co-star. In MTH I had to do action, romance, comedy drama....It was like juggling with several balls.

How has Main Tera Hero changed you as an actor?

I am exhausted. But satisfied. I feel sapped out. I can't do another film like MTH for the next two years. I did this film from the heart. We had a huge lot of improvisation on the sets. We were constantly adding, revising, polishing. To me this is what commercial Hindi cinema is all about. After release when I went to the theatre this elderly gentleman came and put his hand on my head and blessed me. Then his children came and told me they liked the film. For me, that was the reward for all the hard work.

Salman Khan is the voice of God in MTH. Is he a role model?

He is a role model for not just me but every young actor. More than anything else he's a tremendous human being. He just called up and Dad and said, 'I want to do something for Varun.' Dad gave him the voice of God. We didn't want Salman to help market the film.

My role model for marketing films is Shah Rukh Khan. He is unbelievable. Look at how he marketed Chennai Express.

Your dad had a health scare during the shooting of MTH in Bangkok?

My Dad has not been taking care of his health. I've actually inherited my energy -level from him. But he's not physically fit enough to carry off the energy. I tell him to get fitter. I take him to the gym with me. But not frequently enough. To add to his weight woes he is a foodie. But he has cut down on his food. The only reason I am talking about it in this interview is because I'm desperate for him to get fitter. Lots of his friends tell him to change his lifestyle. I feel if he reads what his son is saying he will take care of his health.

You're also very close to your brother Rohit. Any plans of working with him?

I definitely want to work with him. When the time is right, we will. But nothing planned right now.