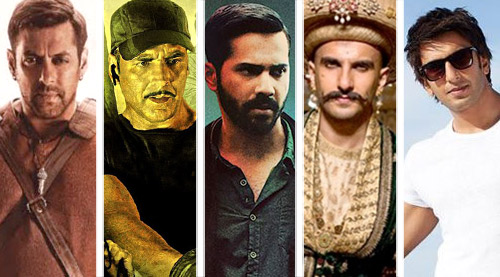 Salman Khan fans are outraged that their favourite actor is being ignored at popular award functions. When a film like Bajrangi Bhaijaan has seen massive success at the

Box Office and broken all records after its satellite release on television, does one really need any vindication in terms of awards which are not meant to be taken seriously anyways? I've spoken

to many people who are fierce critics of Hindi movies and all of them have great things to say about Bajrangi Bhaijaan and Salman's stellar humane performance. Akshay Kumar fans have been

upset at the step brotherly treatment given to his landmark performance in Baby. Nawazuddin Siddiqui's magic in Badlapur deserves to be weighed in Gold, even though awards elude him.

Ranveer Singh has been winning the best actor trophy at popular award functions this year and one should not take anything away from him. He delivered one of the finest performances in Indian movie

history with Bajirao Mastani. The body language, the diction, the angst, the heroism...Ranveer was top notch and deserves all the appreciation. But the problem with popular award shows is

that they've been relegated to being television shows rather than an evaluation of one's ability and hence they're increasingly being taken for granted.

Anil Kapoor won best supporting actor at the Filmfare Awards this year. Anyone who has any understanding of movies would vouch for the fact that Mr. Kapoor and Shefali Shah were the leading actors

in Dil Dhadakne Do. It was Priyanka Chopra and Ranveer Singh who were the supporting actors. But actors in Bollywood are evaluated on their present standing in the movie business rather than

their standing in the context of a particular movie. Sad!

At the Filmfare Awards, Mr. Amitabh Bachchan won Critics Award for best actor for Piku. Looking at the context of the film, Mr. Bachchan played a superlative supporting role rather than

Kangna has changed the game as for the very first time a woman oriented film has crossed Rs 150 crore at the box office and if this is not popular then what else do you need? Deepika was brilliant

in Piku which was a huge commercial success but will be remembered for its critical appreciation. Why give away two awards for best actor in the first place? To get more actors filling up your

Johny Lever's hugely talented daughter Jamie Lever was a laugh riot in Kiss Kisko Pyaar Karoon and she wasn't even nominated for best actor in a comic role in the award shows that have had this category this year. The brilliant Vicky Kaushal from Masaan wasn't considered eligible for best debutante as he has done two minute roles in two films. You can surely raise the bar and set new standards.

There are many reasons why popular awards are not taken seriously. Yes they are good entertainment shows but only while watching them on television. I don't go for award shows as sitting through five to six hours of mayhem is boring to the hilt. It is no open secret that awards are up for purchase and quid pro quo happens. Big actors are part of the show either for money or awards. The relatively smaller actors are there as they get free publicity by giving bytes on the red carpet and by being seen in the audience. I've been approached for doing an interview with an upcoming actor who shall be getting an award at a popular award show (wasn't it meant to be a secret till it's announced). The PR team requested to play the interview immediately after the award function. I politely declined.

One doesn't know how one can rectify the malaise of this battery of award functions. We surely deserve credible awards. We must draw a line between awards night and entertainment night. I wouldn't

like to draw parallels with Oscars as they've been known for heavy lobbying and for the last two years none of the black actors have been nominated in any category implying a clear racist bias. But

yes Oscars are seen live all across the world. That's one thing we must have. There has to be a time limit for the evening to go on air. Any and every popular award show in India lasts for over 5

hours from which television bosses cull out 'material' worthy of 'entertainment'. By the end of the night, most of the people have left and handing-over-the-awards is more of a formality. Yes you

can always edit during the television broadcast and cut to a thick clapping crowd captured from earlier part of the show. Yawn!

We would urge the patrons of Bollywood Hungama to suggest ways in which popular award shows can regain some sort of credibility. Please write down your comments and participate in big

numbers. It is about time we changed a few things in Bollywood. Thanks!