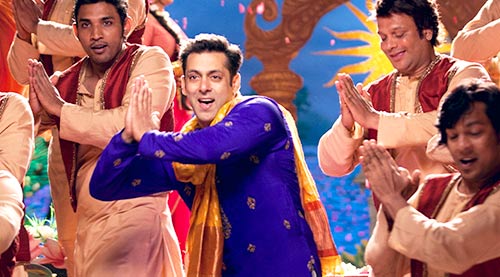 And then, there are ICONIC BLOCKBUSTERS that come by once in years!

Mughal E Azam, Sholay, Hum Aapke Hain Koun, Dilwale Dulhania Le Jayenge, PK are some of the films that not only made tonnes of money, but became iconic milestones in the century old history of Indian cinema! They were hailed by the movie going audience when they released in cinemas and still continue to be watched by a large number of people when they play out on TV channels! As fans of great cinema and members of the film fraternity, all of us wait for such films to come by, not only because they plough a lot of money into the industry, but also because they are the ray of hope for a business that has a sub-10% success ratio in terms of return on investment!

This year on Diwali, Rajshri Productions (P) Ltd shall release their film Prem Ratan Dhan Payo, which marks the coming together of a pair that holds an envious track record at the box office - the master director Sooraj R Barjatya and the megastar Salman Khan! After Maine Pyaar Kiya, Hum Aapke Hain Koun and Hum Saath Saath Hain, the expectations that the trade and the audience have from this duo are sky high and I believe that the film will not just match the expectations of the audience, but surpass them by a long shot to join the league of iconic blockbusters that we celebrate till today!

Whenever I put on the TV over the weekends and flip channels, 9 out of 10 times, Zee Cinema plays out one of Sooraj Barjatya's movies! The only reason why they do so, is because the films continue to get a solid viewership every single time they are aired, despite the number of repetitions week after week, year after year! The success of these films on the tube can be attributed to the fact that they are made for a universal audience! Every single member of a typical Indian family has something to take away from these cinematic gems! Not only do these films entertain, but they also make us want to be better people, by showcasing the values, love & respect that all of us would consider nothing short of idealistic in today's world! They are our family bonding activity! They are our connect with our culture! They are the best route to escapism in a world where the newspapers tell you about murders, rapes, scams and other horrid crimes and incidents every morning! In times when sensationalism, dark & edgy cinema, abusive & cocky dialogues that make film makers haggle with the censor board are the order of the day, you are about to witness a clean, entertaining & inspiring film, that will break the clutter and make you laugh, cry, love, cherish your relationships like never before & try to be a better person!

Many people have been questioning the relevance & potential for receptivity of a film like Prem Ratan Dhan Payo in these times, but interestingly, there couldn't have been a better film than a trademark Rajshri family entertainer to show us the mirror & make us reflect upon the way things work in families all over the country today. This film is possibly a game changer in terms of the audience it shall cater to primarily. While most Salman Khan films play to the galleries of the masses, this one shall also bring the women / housewives in tier two & three towns who have switched entirely to daily soaps on the television for their entertainment back into the cinemas in huge numbers. Besides, it is expected to have a word of mouth that will ensure that tickets are booked in larger quantities than the regular standards today to accommodate the entire family, rather than a person or two for company. The movie shall in all probability, make us Indians value the relationships we have with our families & the joys we cherish when we spend quality time with them.

Maine Pyaar Kiya was a story that told us what true, unconditional love meant. Hum Aapke Hain Koun showcased the importance of sacrifices that we make for the happiness of those we love. Hum Saath Saath Hain was about the strength of unity in a family. And Prem Ratan Dhan Payo shall make us value our relationships, irrespective of the ups and downs they go through in life!

Let the countdown for the release begin! All of us in the show business shall have more reasons to celebrate than just Diwali!