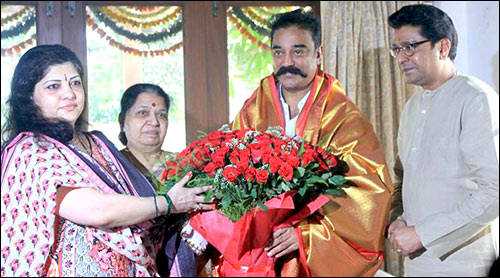 Today, the south Indian superstar Kamal Haasan met with the MNS (Maharashtra Navnirman Sena) chief Raj Thackeray at his residence ('Krishnakunj') in the morning. He was welcomed with a shawl and bouquet by the leader.


Speaking about the meeting, Kamal Haasan said that Raj and he are old friends and that he had just come to meet him and shake hands. Kamal Haasan also met Raj Thackeray's wife Sharmila and his daughter Urvashi. While Sharmila Thackeray greeted Kamal Haasan with a traditional 'namaste', Urvashi Thackeray touched his feet respectfully and sought his blessings.


Meanwhile, Sandip Deshpande (spokesperson-MNS) said that the said meeting was a very casual one. Since the two were friends, Kamal Haasan had just come to meet Raj Thackeray.


News reports say that this meeting lasted for almost half an hour.