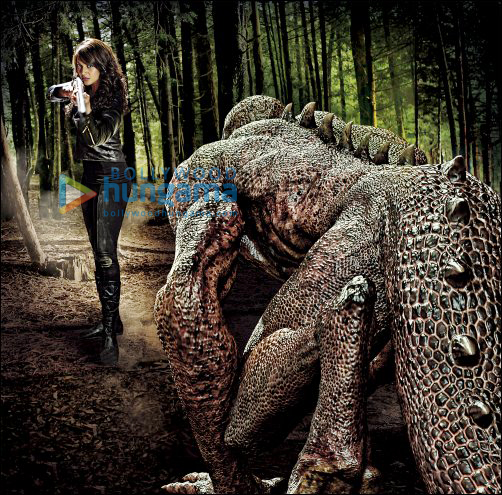 Indian audience has seen a range of movies on mythological characters that showcased a lot of India's history. Vikram Bhatt is back to create fear but this time with a sense of adventure for the audiences and with a character based on Indian history - Brahmarakshas.


The word Brahm means God and Rakshas, is the demon that inspired Vikram Bhatt to create his next release Creature 3D. Brahmarakshas is actually the spirit of a man who has vowed to devote his life to God but, who has done evil things in his life or has misused his knowledge. He is therefore cursed to suffer as a Brahmarakshas after his or her death. As per Hindu mythology, Brahmarakshas is a powerful animal like Creature, who has lot of power and only few in this world can fight and over-come the predator.


This predator is the biggest in the jungle who is alive since 400 years and grows stronger as time passes. Brahmarakshas are sharp and skilled hunters.


Vikram Bhatt has got on celluloid a Creature inspired by the Brahmarakshas who are difficult to be killed and the film's main protagonist Bipasha Basu with Imran Abbas have to find a way to kill the predator/animal. Creating the creature was a task as he sketched more than thousand types of creatures keeping in mind the look they carry and after showing it to his core team, Vikram finally shortlisted on the one which he developed over a period of three months.


Creature 3D is a sci-fi thriller film which will be the first time in India that is an answer to international creature films with high quality 3D effects. Vikram with his VFX team who are based in Chennai have worked on the 3D effects which creates an impact on the 70 mm 3D screen. Vikram has specially used the dehumanize software in making the Creature effects and sounds.


In this T-Series produced movie that caters to all audiences Vikram Bhatt will take everyone on the journey inspired by our history and how the lead actors fight with the creature that is the epitome of power.


Creature 3D that is produced by Bhushan Kumar and directed by Vikram Bhatt releases today.


The predator in Creature 3D is Brahmarakshas