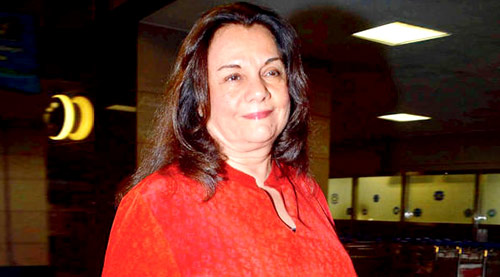 Mumtaz is a name that spins magic from f(r)ame to f(r)ame. She started as a child artiste, and then went on to play supporting roles of sisters and sahelis to heroines. Finally, Mumtaz reached the leading lady's slot in 1970s with a slew of super hits. She retired from acting at the prime of her career to marry business tycoon Mayur Madhvani.

Sighing with a sense of a life fully lived, Mumtaz said, "I've been lucky. I started my career on the wrong note as a supporting actress. In spite of that, I became one of the top-most heroines at the age of 18. That shows how much people loved me. I'd be appreciated even when I was not the heroine. My fans were with me. Then, I married at 26 and left India."

Mumtaz now lives a life of luxury in London, far away from the Bollywood bustle.

Recalling her childhood, Mumtaz, who thrilled with seductive and sensitive performances in Khilona, Tere Mere Sapne, Aap Ki Kasam, Aaina and Prem Kahani said, "I was raised by my grandmother, mother and my aunt. It was a wonderful childhood. We were a typical Irani family. My mother was divorced when she was only 16. Then my mother re-married. She had two sons. One of them died. But, I've a stepbrother named Shah Rukh Askari in Mumbai."

She now lives a sedentary life in London. "I don't socialize. I rarely drink. I am not a night person. Clubs are not my scene. I hate the noise. One can't converse. I am a daytime person. I go out for lunch with my friends, and then stroll for a few hours. London is a perfect city for an afternoon walk. Then I am back home. I watch educational television and the news so I'm aware of what's going on in the world. Then, by 11, I am fast asleep. I wake up at 7 am."

This diva, who stole millions of hearts including Shah Rukh Khan's, has no regrets about quitting Bollywood at the peak of her career. Her last film, before she married and left India was K. Balachander's memorable Aaina.

Says Mumtaz, "I did make a comeback in 1990 with Aandhiyaan. When that flopped, my heart broke. I did get offers after that. But, I decided against doing any more films. There's too much politics in the film industry. I saw no need to go through the rigors of the rat race. I live in London. Working in Mumbai would have been impractical. It meant too much stress. I didn't need it."

Ruslaan Mumtaz opens up on joining the cast…

"Nimmi was well-read, lively & fun to be…

10 Hottest Bollywood actresses of all time

It's a wrap for Sidharth Malhotra and…