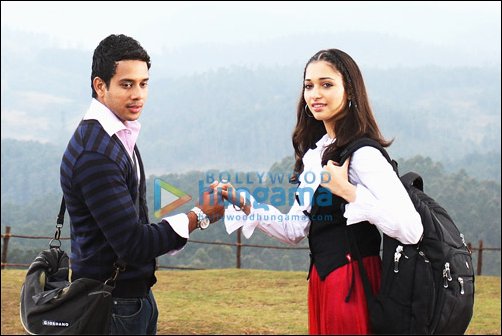 Bollywood has always been remaking successful films from the South. While some remakes like Bhool Bhulaiyya have been successful, some like Short Kut have failed to hit the bulls-eye. Nevertheless our filmmakers continue to seek inspiration from films down South. Now in a reverse trend of sorts a successful Hindi film has been remade in Tamil and is ready for release

The film in question is the Shahid- Kareena starrer Jab We Met which has now been remade by MoserBaer and Blue Ocean Entertainment in Tamil. The Tamil remake is called Kanden Kadhalai and stars Bharath and Tamannah in lead roles.

Going by the stills from the movie, one can see that the makers have decided not to change much from the original film. In fact Bharat and Tamannah are seen in exactly the same costumes which Shahid and Kareena wore in Jab We Met. Even the posters of the film bear a striking resemblance to the original film. However unlike Jab We Met which was shot at some picturesque locations of North India, Kanden Kadhalai has been shot at the beautiful locales of Palani, Theni, Kodaikanal and Chennai down South.

While Jab We Met went on to become a huge hit, one will have to wait and watch how Kanden Kadhalai fairs at the B.O. when it opens across cinema halls in September this year.