Actor Rhea Chakraborty was arrested by the Narcotics Control Bureau (NCB) earlier this week for allegedly procuring drugs for late actor Sushant Singh Rajput. Since her arrest, many celebrities have come out to stand in solidarity and support the actress. The quote that is being used is 'smash the patriarchy' after Rhea was seen wearing a black T-shirt with the same slogan. 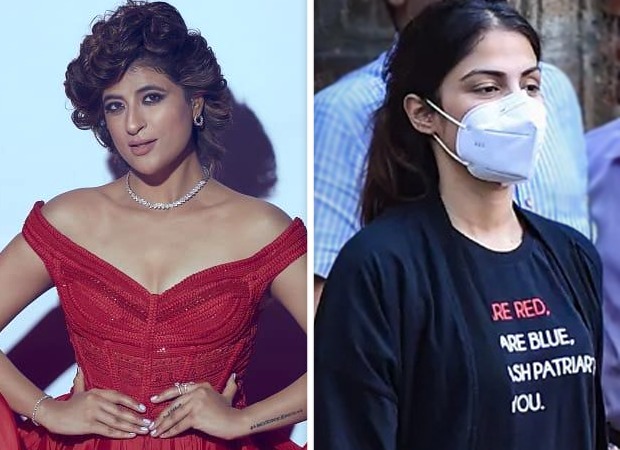 Tahira Kashyap penned a lengthy note recalling an incident from her past while backing Rhea Chakraborty.

And by she I mean feminism, which is being crushed every day. Why would I choose to write about this much-trodden topic now? Perhaps my threshold of tolerance has been tested in the last week, jolted by this new wave of anger against patriarchy. All of the talk in the media, the chatter on twitter, the footage on my tv screen, re-awakened something in me. And so in the last week when I had my usual share of experiences - the usual experiences that happen to every woman, every single day - I lost my poise.

We are currently in Chandigarh where the trees are outnumbering the cows by the roadside and my mother’s fixation with her jamai is trying my patience. A few days ago, we had a small get together at home.

At a recent get together in Chandigarh, while I offered a plate of hot tikkis, a distant relative wearing a Salvador dali mask , the one covering just the mouth, looked mighty impressed with my husband and the way he was helping me out. While slipping two tikkis into his plate he remarked“ beta you should look after your husband, feed him more greens”. Before I could react, my wise mother quickly put two more tikki’s in his plate and ushered me, the ticking time bomb, aside.

Needless to say I was appalled and wondered why I was expected to feed greens to the man? I understand when my father expects me to give some greens to Jyoti, the cow, who comes to our house every Monday and to also give 20 rupees to her accomplice. It’s only fair that Jyoti has such an expectation, though I doubt she discriminates between which gender feeds her but what was this tikki-munching man thinking?

Red hot with anger, I turned around and went up to the relative and said, “actually he is making me a salad tonight, I’ll ask him to make an extra serving for himself’. I was tempted to crush his toes as I made the speech, but held myself back and simply stomped out of the living room. After all who wants to deal with name-calling? I mean with ‘vishkanya’, ‘gold digger’ and ‘Bengali women’ doing the rounds I don’t want ‘khoonkipiyaasi’, ‘toes crushing’ ‘Punjabi women’ to start another wave.

I was, later on, pulled up by another senior family member for my behaviour. I agree I was being harsh but was amazed by the offense taken. Perhaps every time a woman is called ‘haramkhor’, ‘fucking m#$@#chod’ on live feed, we should go out protesting too…oh but aren’t we already? Yet when we do, we are lose cannonballs who are frustrated and need to be trolled with rape and murder threats on social media, a platform that has not only encapsulated our lives but defines the very nature of it too.

Recently, we had a meeting with the real estate agent for our family home in Panchkula. The agent’s assistant jumped in with an ingenious suggestion. “We should have a service kitchen along the main kitchen. The Khurrana bahus would want an exclusive space to cook, na?” This time, I looked truly bloodthirsty.

There is something drastically wrong with the general outlook towards women. The expectations are unreal. “How is ignoring a lame comment by a roadside Romeo unreal?” You may ask. Keeping quiet, enduring is unreal. From the ages of 11 and 12, I have been bottom pinched so many times that I, like every Indian girl, have lost count - be it standing in queues outside a single screen theatre or lining up outside a mandir waiting for a chance to pour milk over shiv-ling and see the linga ‘drink' it. If someone had called out these filthy minds for what they are, perhaps I wouldn’t have to experience what I did. And if we don’t call out now and have zero tolerance for the smallest of remarks how can we ensure the safety of women and children?

Some people say that feminists shout too much at everything, that they go overboard. Let’s play a game I recently read about - “can you reverse a proposition and get the same results?” And so each time a remark is made, or some undue expectation is thrown at us let’s try to put the man in that situation. For instance, “both the Khurana sons will want an exclusive space to cook “ or “did madam allow you to shoot while the kids go to school?” I can add an entire list of questions and this is from a place of privilege. I can’t begin to fathom (but don’t want to ignore) what must be happening to the rest of us across different strata of the same patriarchal society. So until the equation becomes equal, “roses are red, violets are blue, let’s smash the patriarchy, me and you”

Many celebrities have used the quote, "Roses are red, violets are blue, let's smash the patriarchy, me and you" to support Rhea Chakraborty.

ALSO READ: Tahira Kashyap Khurrana shares first glimpse of her unreleased book, The 12 Commandments Of Being A Woman