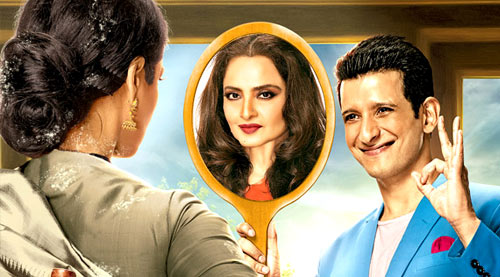 The latest movie release, Super Nani, starring Rekha and Randhir Kapoor, brings back this popular star pair of the 1970s and early '80s. As befitting their ages, Rekha is the grandmother of the title, while Kapoor plays her dominating, churlish husband who has always treated her like a kitchen doormat.

The Rekha-Randhir combo was popular and oft-repeated even though the majority of their films together were flops, because of their personal chemistry. Raampur Ka Lakshman and Dharam Karam (also directed by Kapoor) apart, they failed to get hits together but shared a fantastic rapport. The team had also starred 14 years ago in Mother, but the film came and vanished faster than a meteor.

Hindi cinema's time-honoured convention of popular lead pairs, like Raj Kapoor-Nargis, Amitabh Bachchan-Rekha and in contemporary times Shah Rukh Khan-Kajol, is one of the key ingredients of our movies. Here's a look at the other such successful star combos that had a second innings:

Amitabh Bachchan-Hema Malini remain the team with the highest success ratio among old pairs: Baghban (as the elderly protagonists), Veer-Zaara (as the fetching old couple), Baabul (which did very well overseas) and Bachchan's home production Bbuddha Hoga Terra Baap. In their earlier innings, they were mostly seen in blockbusters (Sholay, Trishul, Andhaa Kaanoon) opposite other co-stars, but did manage to romance in Naseeb, Satte Pe Satta, Kasauti and Desh Premee.

In the millennium, Bachchan also repeated his heroine from the 1983 hit Coolie - Rati Agnihotri - twice, in Kaante and Dev in the millennium, serenaded Zeenat Aman (after Don, Dostana, Laawaris) again in Boom! and worked with Sharmila Tagore (Desh Premee and more) in Eklavya and his home production Viruddh.

In the male-dominated environs of Hindi cinema, the hero's innings was the predominant reason for the possible resurgence of an old team. So when Dharmendra himself has been largely away from the movies, it was only when he agreed to put in a cameo opposite co-star (Sharafat, Raja Jani, Seeta Aur Geeta, Jugnu, Dost, Pratiggya and Sholay to only mention the cream of their hits) that we saw him with wife Hema Malini in the attempted re-launch of their daughter Esha Deol - Tell Me O KKhuda.

Incidentally, the last Dharam-Hema film (of some 28 movies!) to hit the screen when they were at their peaks had been Raaj Tilak (1984), but a delayed Aatank had crawled into the marquee in 1996!

Rishi Kapoor-Neetu Singh was the lovable pair of Khel Khel Mein, Rafoo Chakkar, Kabhi Kabhie, Amar Akbar Anthony, Doosara Aadmi, Jhoota Kahin Ka and some flop films, and after their marriage in 1980, Neetu had quit films for a long while. Lured by multiple filmmakers to come back, she accepted films only with her husband, making her first miss-n-blink appearance in Saif Ali Khan's production Love Aaj Kal and then doing a full-fledged role of a Delhi woman in Do Dooni Chaar, a short but spunky cameo in Jab Tak Hai Jaan and finally being a comic cop in the misfired Besharam.

Rishi also worked with his Tawaif (B.R. Chopra /1983) co-star Rati Agnihotri in Hum Tum (2004) after the unsuccessful Kuch Khatti Kuch Meethi (2001). In all the three films they had dramatic confrontations with each other, with the latter two having them play an estranged couple.

Of course, we all know about the iconic Bobby (1973), then the first lead film of Kapoor and (then) the first and last film of the sensational Dimple Kapadia. Dimple staged a comeback with Saagar (1985), which had too much of a deja vu feel of Bobby to really work - besides, Dimple had also gone through a traumatic marriage by then. But so good did the team look together that an unusual, mature love story, Pyaar Mein Twist was conceived with them in 2005. After this, they were again cast - this time as producer-actor Akshay Kumar's parents who had sharply-etched characters - in Patiala House (2010). By this time of course, Dimple had become Akshay Kumar's real-life ma-in-law!

Vinod Khanna romanced Dimple too - in the 2010 Dabangg, and they had been a popular pair ever since Khanna's comeback vehicle Insaaf (1987) after his spiritual phase, even though their other earlier films like Lekin had not really set the b-o. on fire.

Of course, there were occasional such examples even in the past - Dilip Kumar and Waheeda Rehman (Ram Aur Shyam) were cast as the older lead artistes of Mashaal (1984) after their last outing as the lead pair in Aadmi (1968), Dev Anand had a middle-aged Hema Malini (Johny Mera Naam, Amir Garib, Jaaneman) in Censor (2001) after Sacche Ka Bol Bala (1989), Rajesh Khanna worked with Zeenat Aman (Ajnabee, Chhaila Babu) in Jaana - Let's Fall In Love (2006) after Jaanwar (1983) and Mithun Chakraborty and Ranjeeta (Humse Badhkar Kaun?, Ghar Ek Mandir et al) resurfaced in the anonymously released Zindagi Tere Naam (2008) straight after the '80s.