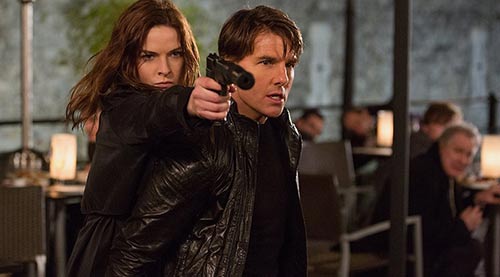 At one point in this muted and magnificent ode to old world heroism, Ving Rhames, an actor who conveys more through words than action, turns around to the rest of the compelling cast and asks, 'What do we do now?'


That's a question this clever and scintillating spin on the subject of What Ethan Hunt did next, never needs to ask. Apart from being the only film title ever with a colon and a dash in it Mission: Impossible - Rogue Nation is unique on many levels. It's an adrenaline-pumping action film that never gets short of breath.


Not a single wheezy moment in narrative even when the action runs ahead of the plot.


Cleverness is not a badge that the fifth film segment of Mission: Impossible wears to impress us. It is a given. The smart-ass lines flow smoother here than ever before.


And yes, this is as good a time as any to let you know that Tom Cruise at 50 looks smashing. Let's just say he is the rich man's Anil Kapoor.


This time Cruise has company. No, it is not Mr Kapoor. Formidable company. His co-star this time is the hypnotic Rebecca Ferguson who brings to the table a synthesis of steel and silk seldom seen in action films. Oh yes, we've seen umpteenth femme fatales play it both ways with the hero and villain in innumerable films.


Ferguson's Ilsa Faust isâ€¦something else. She is sexy and deep. And she is as good looking as Cruise. Which is saying a lot!


It's hard to believe I came away from the fifth installment of Mission: Impossible without seeing the very sexy lead pair make love even once. Not even a kiss! Could it be because the breathless pace of living in the blast lane doesn't allow the pair to brush their teeth? And no, it's not the censor board that played spoilsport. It is in the nature of things this time.


Among the many lessons of life that I came across from this vigorous take on how to beat terrorism by being cute and sexy and resolute in ways that somehow James Bond could never be in his soberest moments, is that gender equations are not about physical proximity. The much-maligned cult of filmed chemistry finally unravels the untold mystery of how two co-actors can look completely made-for-one-another even while kicking serious ass in some of the most exotic spots of the globe.

There is a moment in the seamless supremely sexy storytelling where Cruise and Ferguson slide down on a rope from the Vienna opera house to the bustle below. Or later, much later, the stunning soundtrack slips into silence as Cruise and Ferguson look at one another.


And then they explode shooting their way through the climax. The pair makes love without using their private parts. While Cruise and Ferguson are smoking-hit in the temperamental zone of international syndicated crime, Cruise's Ethan Hunt also shares a terrific rapport with his buddy Benji, played with contagious gusto by Simon Pegg. With tongue lodged in plenty of chic, Dunn is cast in the Superman mould. In his office space he's a boring computer nerd. When pal Ethan calls he transforms into a globe-trotting spy-saviour.


Together, Cruise and Dunn are a whole lot of fun. Ditto the film. Director Christopher McQuarrie steps into MI territory without pre-conceived notions on how Ethan Hunt's heroism has to be harnessed. He allows Cruise a free-flowing tide of machismo, never over-the-top but unleashed with just the right dosage of dynamism and deliverance.


The action sequences span a suave spectrum of scenic locations. From on top of a Vienna opera stage, to the bottom of a watery vault containing a computer code that could destroy the world, Mission: Impossible 5 spans roguish universe hefty hijinks.


The film is impossible to leave for even a second. It's not because Cruise copulates with Ferguson with his eyes. It's a lot more. This time, his heroic group of fighters is dismantled for the want of a coherent motivation.


The fifth film in the series doesn't suffer from an identity crisis for even a minute. You can tell the director is enjoying the enormous narrative without abandoning a sense of responsibility towards the franchise.


Mid-way into the majestic mayhem Cruise and Ferguson chase the bad guys and each other on ultra-fast motorbikes in Morocco.


That's when you know what was meant by heart-in-the-mouth suspense. This is everything you always wanted in the Mission: Impossible series. A nerve wracking sumptuous entertainer with the good guys and the bad guys peering enviously into one another's world wondering what the other team has got that they haven't.