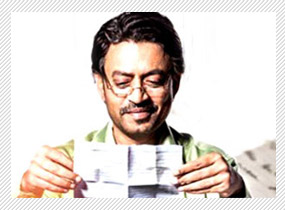 In Mrinal Sen's Khandhar desolation was defined and epitomized as much by Shabana Azmi's face and physicality as it was by the architectural ruins where Sen shot his dirge-like tale.

In The Lunchbox, debutant director Ritest Batra who makes you wonder if this is really his first feature film does not seek easy escape routes for his characters' destiny of drudgery. The film is set in the heart of Mumbai city where everyone is busy making a living or just trying to live. Right away, this extraordinary film catches your attention with the way the sounds and the relentless rhythm of that 'City That Never Sleeps' are captured and put on screen.

While remaining purely cinematic, there is something completely 'non-cinematic' about The Lunchbox. It is stripped-down of all affectations. The secrets of lonely hearts are not laid bare through conventional cinematic devices - the use of background is so sparing that you often end up listening to the music inherent in everyday routine: the way the trains move in the sweltering afternoons, the sound of auto-rickshaws bustling through bylanes, the sizzle of onions frying in a suburban kitchen, the sound of the television playing as a nuclear family of three lonely people have dinner in deathly silence.

Not just Ila, the cooking cleaning suffering housewife, even her preoccupied husband (Nakul Vaid) seems so lost in the act of existence. Even their little daughter looks so forlorn with her rag-doll, as though she needs a good cry but is not sure if Mama will be there to console her.

And to scare you there are whispers of a woman jumping to her death with her daughter. Ila won't ....never! Right?

Holding back the rituals of grief is a well-worn suburban ritual that Ritesh Batra's screenplay understands only too well. Every individual in Batra's universe is disconnected from an inner tranquility and distanced from the people around him or her. It is no coincidence that Ila, our forlorn heroine who thinks of suicide but holds herself back, connects the best with an unseen Aunty living with her comatose husband in the floor above. Aunty (Bharati Achrekar giving a vigorously expressive performance through her voice alone), we learn, never turns off the ceiling fan that whirrs above her inert husband. She fears if the fan stops, so would her husband's breath.

These little life-asserting pretences we indulge ourselves in to believe that we lead meaningful lives, is the crux of The Lunchbox. Hence Ila strikes up an illusory bond of empathy with the almost-retired office-goer Fernandes (Irrfan Khan). It starts off with a wrongly-delivered dabba to a lonely widower in a typical non-government office. The initial delight of two strangers communicating facelessly soon turns into an intriguing relationship of empathy. The tragedy of two lonely people , one married in a loveless partnership and the other still wedded to his dead wife's memory, bonding over burp-inducing tiffins filmed with gourmet dishes, is punctuated by the omni-presence of an annoying intruder, played by the very wonderful Nawazuddin, who keeps barging into Fernandes' meditative melancholic interactions with his faceless culinary benefactor.

Among the three protagonists Nawazuddin as the deceptively shallow character Sheikh has the toughest role. He must seem frivolous jovial and insensitive to Fernandes' lonely existence, though he is anything but these things. Further, he has a happy life. And that should and does fill him with a guilt he cannot express. In many ways, the bond that grows between Fernandes and Sheikh is far more tenable and real than the one Fernandes discovers in the aroma of the freshly-packed tiffin that lands up every day on his table.

Fernandes' loneliness is not of the same breed as Violent Stonheim in 36 Chowringhee Lane. He is alone, trapped in memories of happiness but also surrounded by noises and smells of a normal life. That little contact he makes with a family in the building opposite his own, through his window, is emblematic of his empathetic solitude.

Yes, this man has hope.

Food, which contours the tragic love story of Batra's film, is used almost as a reminder of life in the face of death. When Ila's mother (Lilette Dubey nailing her character's abject desolation in just two deftly-written sequences) finally loses her husband she talks of hunger rather than loss.

Bereavement and loss affect individuals in very strange ways. What The Lunchbox says in a language that exudes the scent and comfort of the familiar is that we can strive to fill the emptiness inside us by cooking, feeding, remaining busy with motivating acts of daily gratification. But we are finally left with nothing to hold on to. This frightening thesis of existence is laid bare in The Lunchbox with a compassion and warmth that embrace morality.

This is a sad film. But it isn't depressing.

As the two protagonists whose souls collide and then come apart, Irrfan Khan and Nimrat Kaur give exceptionally sorted-out performances even as their characters grapple with the chaos and complexities of feelings that alas, do not fit into compartments as comfortably as the food in a tiffin carrier. Irrfan's bearing suggests age that won't accept defeat. He is a portrait of stoicism in the face of solitude.Does this actor ever disappoint?

Michael Simmonds' camera doesn't miss a thing. It seems to capture every moment of the characters's inner and outer lives merging the two levels of existence and yet keeping them apart.

I came away from this profoundly moving tale with two of the most unforgettable lines of wisdom I've heard in a film. One of them comes from Nawazuddin who says, "Sometimes the wrong train can take you to the right destination." And then there is Nimrat Kaur, so noble and restrained in her suffering within a pitiable marriage, who opines, "Very often we forget our memories because we have no one to share them with."

The memory of food, friendship and forlornness associated with The Lunchbox would stay with me for a very long time.

Some films scream for attention. This one gets it without trying. What a gentle, tender, soft and sincere love story! Is this really Ritesh Batra's first film?! He demonstrates an atonishing mastery over the craft .And yet The Lunchbox is all heart.Nawazuddin, Irrfan and Nimrat are so much in character that you wonder if these people were born before the script. The film celebrates the extraordinary ordinariness of their lives with a stark sincerity that takes away every morsel of artifice inherent in the act of filming made-up lives.

If this is not the best directorial debut since Satyajit Ray in Pather Panchali then I am probably missing something vital.

And that's what this film is about.

"As a dark-skinned economically backward…