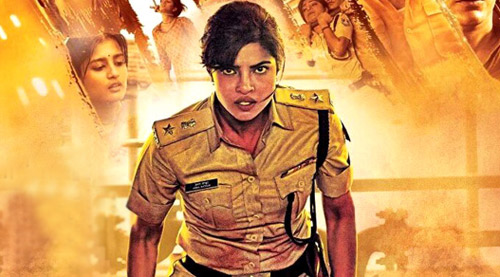 The credit titles lied. They mentioned Priyanka Chopra first, Prakash Jha last, when, in fact he virtually runs the show. In a film filled with enough villains to populate an

entire village of perverse wrongdoers, only Jha's character has a graph. As a subordinate cop he goes from abject corruption to haloed redemption, all within a running time of 2 and a half

I say 'running' time with a purpose, as a lot of the characters in this film-and as usual in a Prakash Jha film-- there are so many people in plot, living and dead, running across the frames that I

lost count after a while . Better to go with the flow, I said. But where is the flow taking us, I wondered in dread as characters, good and bad, hung from trees like dangling rag-dolls.

The first-half has farmers committing suicide. The second-half has criminals being hung by beleaguered farmers (wearing newly purchased pyjamas and kurtas that seem to have seen better days than

the characters wearing them) who play vigilantes with prowling and growling passion. With red-coloured flag-wavers doling out instant justice who needs khaki, even if the one wearing it as svelte

as Priyanka Chopra.
Passion is at a premium in Jai Gangaajal. Every character seems excitable and choleric, as though they were auditioning for parts in Anurag Kashyap's next crime thrillers in the bad-lands of

North India. Soon, they all appear exhausted by the tedious process of being chased down crowded bazaars and bylanes with the camera peering up their hyper-active legs with more than a passing

The film opens all wrong. For the first fifteen minutes, we see Prakash Jha's character snagging corruption with wicked glee. Priyanka's character is appointed the newly recruited police officer in

replicates the rhythms of a high-school drama on corruption staged by school boys who want to impress the principal after a night of rowdy doings.

While the first-half conveys a breezy atmosphere replete with folk songs that blare with unrelated impunity in the background, the second-half with the gruesome kidnapping and rape of framer's

the injustice lying down.

All this while Priyanka's cop character is shown struggling to exercise her power to control the goons, very often she fails. Priyanka's performance as Abha Mathur too is more about trying than

actually achieving harmony between aspiration and execution. She does succeed in making a few scenes work, like the one where the all-powerful politician comes visiting Abha's mother to remind the

But frequently Priyanka's performance is seriously marred by excessive makeup. In the one sequence where she gets out of her cop's uniform and lets her down (literally) at home, she seems to have

painted her face before talking to her mother. Also hampering her performance is the director's insistence on inveigling Prakash Jha's character into almost every dramatic situation conceived by

Jha's performance is not entirely laughable. If only he had allowed his heroine to be the film's hero, as per the demands of the script. By the time Jha is ready for the last hanging of the arch

villain as the mob cheers lustily, the narrative has already hung up its boots.


There are some interesting actors lost in the melee of mayhem that the action director Shyam Kaushal is constrained to create in every other sequence. Rahul Bhat as a NRI devoting his life to caste

to rise above the banshee of injustice that the film raises like the wild-card entry in reality shows.

There is nothing seriously wrong with Jai Gangaajal. Prakash Jha's heart bleeds for the downtrodden. The problem is, so do the characters. Everyone is shown running with or away from lathis

and hockey sticks. Jha gets battered and thrown into a drain. Jai Gangaajal begs for ruminative moments. These are never granted in a film that pelts down brutality mercilessly.

We all care for the poor getting poorer due to capitalistic exploitation. But unleashing mayhem on a war footing is hardly the solution to social inequality. By the time I saw a young boy dragging

and choking an MLA with his school belt, I knew Jai Gangaajal was pleading the case of vigilantism.