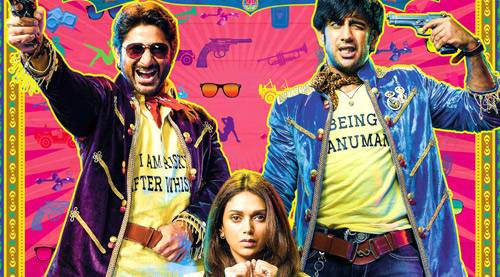 
I may be dreaming. But I distinctly remember Mataji warning me, 'Beta, if you expect another Jolly LLB this time from your namesake (she meant Subhash, giggle) you are in for a let-down. There is nothing really new innovative or striking about Subhash Kapoor's vision this time. In Jolly he was in full control of his conscience and creativity. He was raw and real. He was himself This time Subhash is not sure of the sacred cows that he wants to demolish. And he seems unsure of his moral standing."


I asked Mataji gently why Subhash Kapoor seems shaken and dithering this time. She gently explained, "Beta, its success. And with success comes the responsibility of delivering more success. In Guddu Rangeela the voice of the conscience is monitored and modulated to accommodate crowd-winning characters and dialogues. There are lots of ballsy dialogues which don't really add up. The whole scenario is that of realism in search of as breeding ground. You will see Arshad Warsi and Amit Sadh behave like distant cousins of Butch Cassidy and the Sundance Kid and the first cousins of Saif Ali Khan and Jimmy Sheirgil in Tigmanshu Dhulia's Bullett Raja."


The comparison with Tigmanshu jolted me. Sighed Mataji, "Haan Beta. I am afraid Guddu Rangeela looks more like a Dhulia than a Kapoor film. The scruffy heroes look like they specialize in harmless social crimes, except that they are supposed to be serious crime perpetrators and the audience is meant to take them dead seriously. Beta, you will have to be really committed to Kapoor Saab's storytelling to believe that Guddu and Rangeela are here to create mayhem. They seem as harmless as a couple of scooter-thieves riding pillion with precocity."


According to Matajee the only character who comes across as sinister and frightening is Ronit Roy:


"He plays the mafia don with electrifying immediacy," revealed Mataji as I took hasty notes. "Arshad and Amit play against one another with combustive gusto. But somehow their crime capers seem more about bragging than action. The duo does nothing without seeking backslapping punch lines in their violent arguments. It's almost as if they're two stand-up comedians seeking an audience."


Matajee was specially dismayed by the scarcity of space for women characters. "We are warned that the men are going to live it up king size as the film is named after them. Still one expects more from Aditi Rao than just an angelic face in search of a voice."


Lost is how Matajee described Guddu Rangeela. The next morning I was hoping against hope that she was just being harsh on her disciples who had offended her by singing a song about connecting with her on email. (To be honest, I didn't even notice when the offending song came and went, so busy was I nursing my disappointment).


I hoped Matajee was wrong about Guddu Rangeela. But are the gods ever wrong?

Arshad Warsi reacts to a creative CV made on…