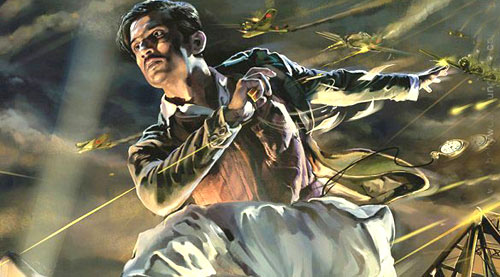 As layer after layer of intrigue and mystery are peeled off this Chinese puzzle of a movie, you are finally left staring wide-eyed and open-mouthed at a work of wondrous art. Exquisite in form, compelling and at times deeply impenetrable in content Detective Byomkesh Bakshy! (DBB) is what a whodunit was meant to be all along.


Somehow Hindi cinema never got down to doing a real murder mystery before this. Maybe the genre waited to be cracked by the deftly disingenuous Dibakar Bannerjee. To get to the bottom of that mystery- of why the murder mystery never came to fruition before this - we must wait for the film on the desecration of the whodunit in Bollywood.


But for now, here it is! Ladies and gentleman - unveiling the smartest, smoothest and slickest and the most slippery whodunit in Hindi cinema's living memory.


DBB is a stubbornly placid tale of an iconic detective who seems to know more about Kolkata and its underworld than any authority of or on the metropolis in the 1940s. The film's writers, and I do mean Urmi Juvekar and Dibakar Bannerjee and not Sharadindu Badhopadhyay who penned the original detective novels, lend a gripping flow to the narrative by bending the plot into shapes which are not recognizable or definable by the rules of the genre, at least, not the way we've so far perceived the murder mystery in Bollywood.


Smells, sights and specially sounds emerge from the storytelling with a casual flair for making the obvious look subtle and the innocuous, dangerous.


Wickedly misleading and yet resolutely clear-headed even as the detective-hero and his reluctant assistant Ajit Banerjee (Anand Tiwari) gambol from one suspect to another to piece together a mystery that has no reference point and certainly no history, this is a film that requires us to abandon all attempts to be one-up on the narrative.


We have no choice but to go with the writer's whimsical flow.


From the seeming ebbing and swelling of the narrative tide, Dibakar seems to derive a huge amount of unprecedented narrative power. The film moves across a luscious labyrinth of sensuous experiences. Kolkata's grime and sweat is captured in crumbling guest houses and rickety warehouses where crime is a desirable reality only because the other option is ennui.

The narrative creates a feverish aura of frisson and power- play in the way the characters appear to respond to the socio-political and economic reality of Kolkata in the 1940s. It would be an insult to the film to say the period is created with unhampered pitch-perfection. Because not for even one shot do we feel the hand of the art director in shaping the Kolkata of the era gone-by.
Dibakar's old Calcutta of trams and self-important bustle emerges not from cinematic pulls and pressures but from its own volition to create a world where the characters do not seem to pose in the clothes and mannerisms of the time. They just seem to be there from long before the Dibakar Banerjee school of filmmaking came into being.


Providentially Sushant Singh Rajput seems to intuitively comprehend what the director and his brilliantly articulate cinematographer Nikos Andritsakis have set out to do. Sushant doesn't simply get into the detective's skin. He inhabits every nook and corner of the character .With due respects to the vivid portrayal of Byomkesh by Rajit Kapoor in the Doordarshan serial of the 1980s, Sushant is now officially the face of Byomkesh . He owns the part as much as Kinglsey owns Gandhi.


Particularly riveting are Sushant's scenes with the extraordinarily brilliant Neeraj Kabi. When they are together on screen we are looking at neither actor as they both take us to a distance far away from their spoken words.


Swastika Bannerjee's movie-star impersonation is filled with coquettish grace. The performance comes dangerously close to a caricature but is miraculously taken into the zone of nostalgic seduction. And yes, Anand Tiwari as Byomkesh's sidekick looks flustered and tired enough to convince us that the only thing the young in the country can do to avoid catastrophe is watch films while the country burns.


A scintillating synthesis of the cerebral and the sensual DBB is an enigmatic whodunit cooked on the slow burner at a tantalizing temperature. Dibakar Banerjee's Kolkata pulsates with a heart, soul, body and nerves of steel. This is a world whose existence the makers of Furious 7 could never imagine.


It's a difficult world to inhabit. But once you are in, you are in it for good.