“[I want] to simply get back at work with all the ideas that I have curated over the last 3 months. [I want] put those thoughts, ideas and vision to reality,” says celebrity hairstylist Rohit Bhatkar who have been in quarantine just like everyone amid the pandemic. He has been styling actors Sidharth Malhotra, Hrithik Roshan, Ranveer Singh, Abhishek Bachchan, Farhan Akhtar, Bobby Deol, and Dulquer Salman among others. Interestingly, he has also created looks for Sonam Kapoor Ahuja and her husband Anand Anuja and Nithya Menen who works in both Hindi and South projects. He used to even style late Sushant Singh Rajput. 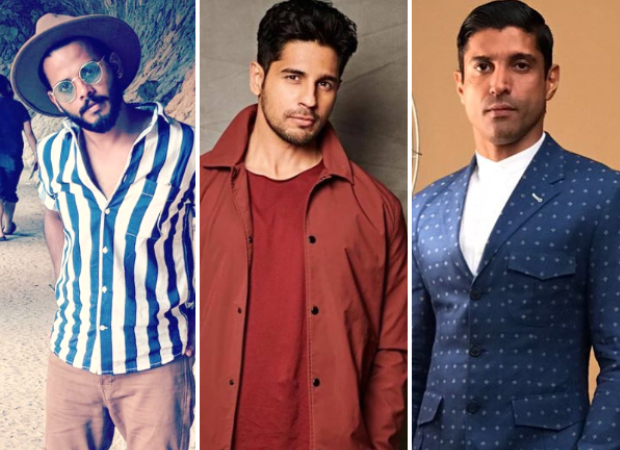 Celebrities look their best at award shows, in movies, on red carpets and at various events is because of the team that works with them. From fashion to beauty, everything is looked after and as they say, it takes a village to curate the best looks.

For Rohit, curating refreshing looks requires extra effort since their creations are seen in public via the celebrities and the pressure is quite a lot. “The process of dealing with hair remains the same for me, be it a client on my chair at the salon or a celebrity. The big difference working with the Bollywood actor is that whatever look you create for a character that the actors are playing for a movie or any other project if the hair is not up to the mark the actor has to pay a price for it,” he tells Bollywood Hungama.

“In today's day and age where social media has taken over and that the people have access to social media so easily, some feel they have all the right to troll or bad mouth any celebrities for something which they feel is not working,” he adds. “So you see the pressure that most of the actors go through. In the industry where you are being seen and judged all the time, we as their team have to put in extra thought behind every look that we create. The process is quite challenging. We have to make sure that we go through the process internally within our team and discuss the look that we want to create. Do trial and errors and then create one.”

He reveals he has worked with big names in the industry. “Well, over the last 2 years, I worked with Sidharth Malhotra more exclusively. I also have been fortunate enough to have worked with Sonam Kapoor, Hrithik Roshan, Ranveer Singh, Abhishek Bachchan, late Sushant Singh Rajput, Farhan Akhtar, Bobby Deol, Dulquer Salman and others,” Bhatkar says.

Rohit Bhatkar followed the footsteps of his father to become a hairstylist since and it was quite a journey. “The inspiration about being a hairdresser came to me naturally as my father is a hairdresser too,” says Bhatkar. “I grew up listening to his salon experiences and stories. And it was quite fascinating as a child for me to know that my father works in an industry where he is able to create something so special for every individual who sits on his chair that they feel confident about it. And that thought itself pulled me right in.  Imagine the feeling of making someone look good or make them feel good, where people trust you the most and that you will do no wrong and they walk out all Happy. It’s close to magic I call it therapy.”

“As a teenager, I would visit my father’s salon on weekends for a couple of hours to see what is trending amongst the people who are coming in for haircuts. And then I’d ask my father to do the same haircut. As I grew and finished my second year of college I decided that I would certainly want to take hairdressing as a profession and do nothing else for the time being. The process of starting the journey was quite interesting for me and is something I will always cherish,” he adds.

Recalling his earlier days, he reveals, “I assisted my father at his salon for a year, where I was first taught how to mop the floor and do the "pocha". My father still says ‘you gotta respect the place where you make your bread and butter’. So for three months I was only cleaning, mopping and dusting the salon space. My main job was to make sure the salon is clean at all times. And in between he taught me how to make tea and coffee and to make sure I serve the clients with a warm smile.. And that made me realize that this is much more than just cutting hair. Gradually I moved on to the more complex things of learning the basics of Hairdressing and Barbering. He took me to many Hair seminars with him and gave me that exposure of not limiting yourself but explore and keep exploring. He said one thing, "you will never know it all. There will always be someone else who has much more knowledge than I do, or you would. So keep exploring and learning."

“After he thought I was ready for the next leg in my career he enrolled me in India's best Hairdressing Academy “Bblunt”. And it changed my perception towards Hairdressing completely. I met so many wonderful talented artists and mentors’ that till date I follow their advice. I did my foundation course from Bblunt and was fortunate enough to have been selected by them to work for the brand. Working with a brand which has a strong vision, knowledge, passion and great directors and mentors helps you to grow quickly and learn things the best way. Over there, I was able to explore all the three pillars of being a hairdresser. I was able to be a salon manager after many years, I was able to be an educator in the academy and I was also able to be in shoot team where I got exposed to working with celebrities and be part of shoot projects such as Ads, Print shoots, magazine covers, movies, etc. All these three pillars were crucial and equally important and I had to undergo a lot of training to be able to put myself into it. After almost working for 12 years for a brand I decided to go solo to test myself into the ocean,” Rohit reveals.

When it comes to planning looks for male celebrities is done through a lot of references Rohit Bhatkar has curated over the years. “There are various factors I consider,” he says. “The clothes, hair and makeup is what I consider as the priority, it is what makes the look complete. They all have to go hand in hand. It should have one story to tell or else the look won't turn out well. Once this is done I also consider clients face-shape, body type and the hair which I will be working on. This all helps us create a look that suits the individual. After seeing all this, the references are used for the hairstyle that I want to create for a particular event. Get inspired with a reference that I have liked and flow in the art that I do.”

When asked whether male experiment with their hair styles often in Bollywood, Rohit says, “Well to be honest the most common challenge with men around the globe is the male balding pattern or receding hairline or hair thinning. Because of this most of the male actors are little skeptical to opt for major change in every movie that they do. Think about it, most of the busy actors that we know do 2 movies in a year on an average. For a movie which will be shot in 2-3months. And then they have to move to another character or play a different role. The hair is not going to grow out so quick. So the chances of creating a different look all the time is very limited.”

What day is it again ????? Lost the track with the days,dates ,weeks and months. Its all the same now I guess. @sidmalhotra giving us #sunday vibes #hairbyme #hairbyrohitbhatkar #sidhartmalhotra #chill #menshair #hair #menshairstyle #messyhair #stayhome #stayhomestaysafe #quarantine #quarantinelife #lifeisgood #vibes #

“Thanks to today's day and age we have good quality and well made wigs and hair extensions. Which is accessible to us and we have that opportunity to create something totally different which works well for a character that the actor is playing, without compromising on their own head of hair. So the times have changed and are still changing to something better,” signs off Rohit.