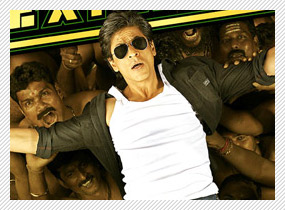 First Look of Shahrukh Khan starrer Chennai Express has released and as usual, there have been whispers and murmurs around the campaign. One of the most striking things about the poster design is the fact that it reads 'A Rohit Shetty film', which has set the tongues wagging.

"Since Shahrukh Khan is much bigger than Rohit Shetty, it was expected that the First Look would actually highlight his name instead of the director. However, with seven back to back hits behind him, Rohit is a brand himself. However, detractors have their own way of looking at things and it is hardly surprising if they are trying to find some gossip out of something as harmless as a poster design", says a film enthusiast.

While the thought is indeed agreeable and it is rather surprising that something like this is being looked at with a microscope lens, a bigger picture emerges if one digs down the archives. Reason being that Shahrukh has time and again being more than happy to allow a director take the limelight, regardless of whether he/she is big or small.

"One quick look at the archives proves that", informs an insider, "Farah Khan was a rank newcomer when she made Main Hoon Naa. Still, Shahrukh didn't bat an eyelid and instead had the film's poster scream 'A Film by Farah Khan'. Later even for her second film Om Shanti Om, the credits went as 'A Farah Khan film'."

The trend continued with My Name Is Khan as well as Don 2. While Shahrukh's name wasn't on the posters, what found a mention in bold letters were taglines that went as 'A film by Farhan Akhtar' and 'A Karan Johar film'.

"Priyadarshan went a step ahead and as is always the case with his films, the tagline went as 'Filmed by Priyadarshan' for Billu. The only person who made an exception was Anubhav Sinha who didn't opt for anything as fancy as this. However, Shahrukh never had any role to play either with him or any other director over the years gone by. Things like these hardly are a concern for him when it comes to a celebrity of his stature. Now if Chennai Express is being sold as 'A Rohit Shetty film', there isn't anything that has to be read between the lines", says an industry veteran.