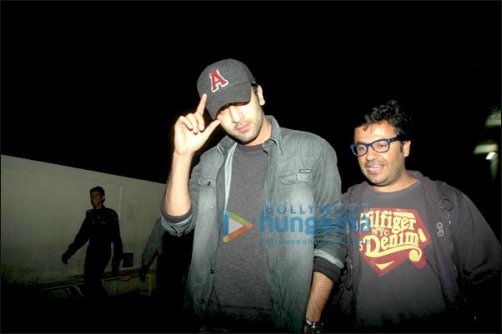 The paparazzi can't seem to get enough of Gen-Next superstar Ranbir Kapoor. Ranbir, who had gone to catch a Hollywood flick on Monday night at a multiplex in Juhu, was spotted by the photographers as he exited the venue.

Ranbir was seen along with his Rockstar co-star Nargis Fakhri and good friend director Ayan Mukerji. While Ranbir kept his distance from Nargis on spotting the shutterbugs, Ayan was seen chatting animatedly with the newcomer.

Recently, speculations have been doing the rounds as to who would be the lucky girl to be cast opposite Ranbir in Ayan Mukerji's next directorial venture. While Katrina was considered a hot favourite, it won't be surprising if Nargis too tries her best to bag the coveted role.