Sonam Kapoor and Anand Ahuja are currently in London gearing up for parenthood. Not too long ago, Sonam’s friends and sister Rhea Kapoor even hosted a baby shower for the Kapoor girl who included some dance, music, and a yummylicious customized menu. Followed by that, the couple now hosted a lunch get-together with their family when the actress’ paternal uncle Sanjay Kapoor, Maheep Kapoor, and family visited their Notting Hill residence. 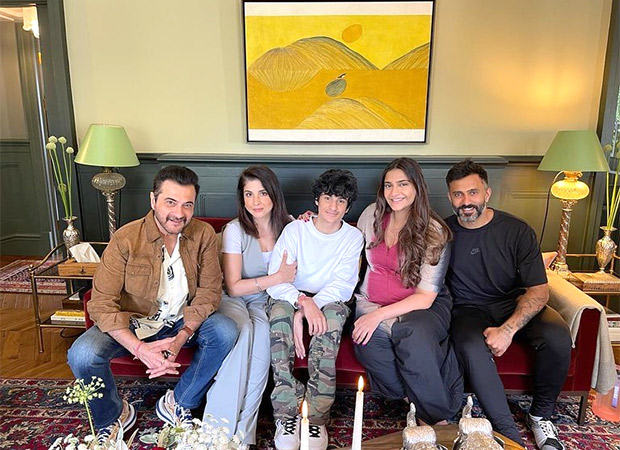 Sharing glimpses of the lovely modern yet Victorian style Notting Hill home, Maheep Kapoor took to Instagram to post a series of photos of their afternoon get-together. Needless to say, she also expressed her happiness over her niece’s pregnancy by dropping heart emojis. She shared these photos saying, “Afternoon with my beautiful niece, baby bump ❤️ ???? & Anand #everydayphenomenal #Family ❤️”

It seems that a lot of Bollywood celebrities are currently taking off to England. Besides the couple and this Kapoor family, yet another Kapoor family has headed to London too. Celebrities like Kareena Kapoor Khan and family, Gauri Khan, Twinkle Khanna, Ranveer Singh, Karan Johar, Sara Ali Khan, Shilpa Shetty among others are currently vacationing in the England capital, making it one of the hotspots for holiday currently.

While Sonam Kapoor tied the knot with longtime boyfriend Anand Ahuja in May 2018, in March this year, the couple announced that they are expecting their first child. The couple had mentioned on their Instagram post that Sonam will be delivering this fall, which is approximately in August–September.

Also Read: Inside Pics: Sonam Kapoor gives us a sneak-peek into her low-key but pretty baby shower in London

Zac Efron and Russell Crowe go on The…