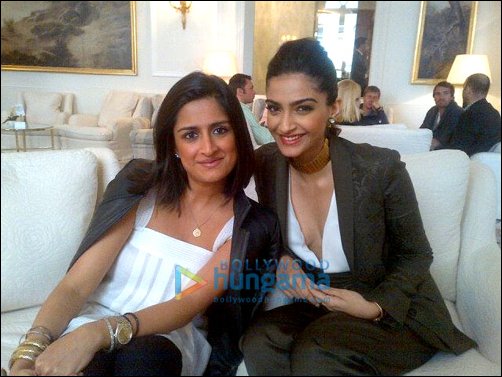 After an impressive debut at the Cannes red carpet last year, everyone is interested in knowing what fashionista Sonam

Kapoor will wear at the Film Festival's red carpet this year.

Sonam who is all set to walk the coveted red carpet at 65th Cannes Film Festival, has already reached the French Riveira. She met up with Frida

For a meeting with Frida Giannini, Sonam wore a Gucci suit from the Fall 2012 collection. She paired the suit with a white blouse with a plunging

neckline and a gold choker. In the picture, Sonam is seen with Vogue India editor Priyanka Khanna.

Sonam wore a black Gucci dress with kundan earrings at Vanity fair Gucci Party. She completed her look with a messy hairdo.

‘She has a wonderful part and is completely…