Actor turned politician Smriti Irani has took to her Instagram to share a video that shows the fourth-highest civilian award being presented to her close friend Ekta Kapoor by President Ram Nath Kovind at Rashtrapati Bhavan in New Delhi. 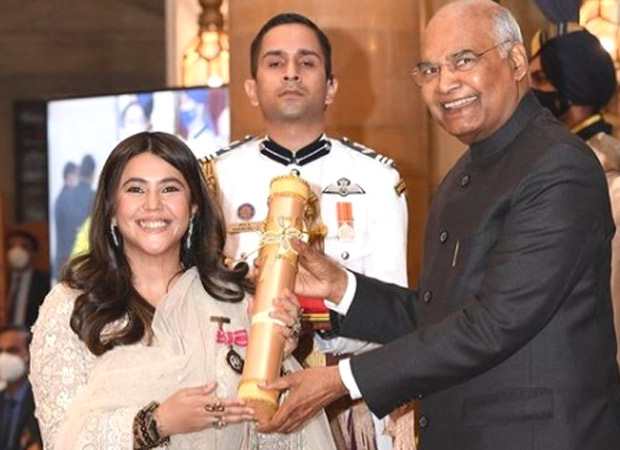 Ekta Kapoor was honored with the prestigious Padma Shri Award on November 8. Union Minister Smriti Irani, who is a close friend of Ekta, congratulated her with a heartfelt short note. Smriti Irani is a proud friend who couldn’t stop raving about Ekta Kapoor’s hard work and how she reimagined and repositioned stories for television, OTT and movies. Along with the clip, the caption of the post read, “Kumari Ekta Ravi Kapoor #padmashri  ... it’s an absolute honour to see my friend bestowed with one of the highest civilian awards in the Nation. She has toiled for years on end to create a brand , a belief , a creative universe which transcended boundaries across many a mediums. Be it Television, OTT or movies , she has reimagined , repositioned not only stories but also her own self . My heartiest congratulations @ektarkapoor #proud #sisterlove (sic),”

Responding to Smriti’s post, Ekta wrote in the comment section, “Thankuuuuu ur love n wishes keep@me@going love u ! I wish but I can achieve half as much as u!!!! You trailblazer”

Smriti Irani and Ekta Kapoor have known each other for years. The 45-year-old politician is the Union Cabinet Minister for Textiles and Women and Child Development. She became a household name with her character Tulsi from the show Kyunki Saas Bhi Kabhi Bahu Thi. The show was produced by Ekta Kapoor’s Balaji Telefilms.