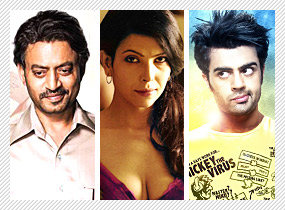 in R... Rajkumar. Right you are, Shahid.

Small films that made an impact in 2013

Stars guarantee box-office returns. The bigger the stars, the better the box-office

returns...right? Not necessarily so. The smaller (read: star-less) films are largely known to

flounder for the want of flourishing footfalls. But surprises did come in small packets. Here's

saluting the small starless wonders of 2013.

1. The Lunchbox: Well okay, Irrfan Khan and Nawazuddin Siddiqui are not quite the

unknown entities. But they are not box-office champs either. And their leading lady Nimrat Kaur

was unknown, until came this small Indie film with a big heart. 3 months after its release,

director Ritesh Batra is still going around the world collecting rave reviews. What worked for

over food and food for thought.

2. Kai Po Che: When Rock On director Abhishek Kapoor decided to do a celluloid

take on Chetan Bhagat's bestseller, he was sure he wanted newcomers...well, he ended up with

three of the oldest newcomers in the entertainment industry. Sushant Singh Rajput, Amit Sadh and

Raj Kumar Yadav have been acting on television and in films for some years now. The film made a

3. Shahid: Hansal Mehta's film has only one star. The true-life personality of

activist-lawyer Shahid Azmi. The actors were subservient to the story. That's what made this

his second film. Pulkit Samrat, Varun Sharma and Manjot Singh sparkled in this sly saga of

wicked wastrels who hope to make it big. Like many recent comedies, this one too was set in

5. B.A. Pass: Big surprises sometimes creep up on us while we aren't watching.

This one about male prostitution in Delhi was a dark somber stunning study of decadence. Hard to

flops behind them. A strong emotional story-line ensured stardom for both the Kapoors.

7. Sixteen: A coming-of-age teen flick directed by Raj Purohit in which a bunch

stories on screen. The film was a shimmering showcase of virgin talent. Fresh original and

endearing. Haven't seen it? Get a DVD, fast.

past catching up with a well-settled peaceful family man was the surprise of the year. Most of

box office if Salman Khan played the haunted man instead of the unknown Sumeet Nijhawan. Here we

Ayushmann Khurrana did after Vicky Donor. Never mind. This vivacious flick on the virtual world

as seen through the eyes of hacker was interesting. Saurabh Verma knows computers as well as his

10. Commando: Vidyut Jamwal scored a slammer with his sinewy stunts in