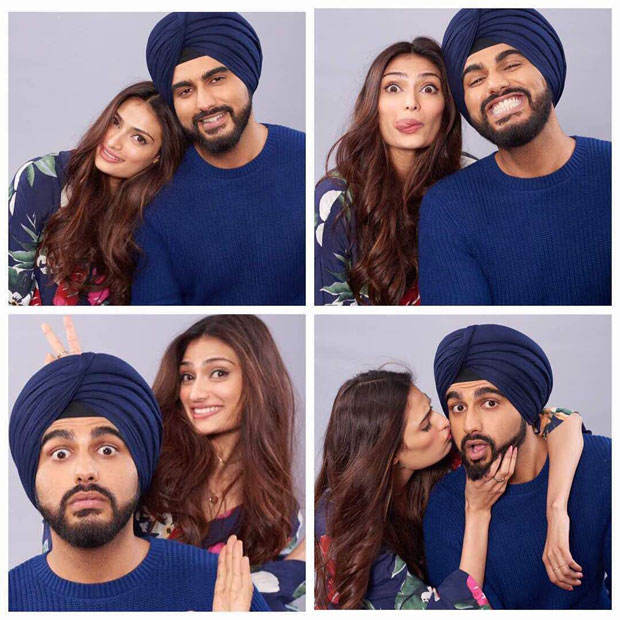 It is always important for actors to share a great camaraderie on screen to portray their roles with conviction as per the script. Many jodis continue to rule the screen, courtesy, their on screen sizzling chemistry. Now, Arjun Kapoor, who has never repeated his co-stars, is paired up with Athiya Shetty for the first time in Mubarakan and here’s a glimpse of their chemistry.

Earlier there were many speculations about romance brewing with the Kapoor-Shetty actors off screen but while Arjun agreed that he knew Athiya before he started the film, both of them decided to maintain silence over the gossips. In fact, the actress stated that she did not pay any heed to such rumours. However, the actors did agree to the fact that they bonded extremely well on the sets of Mubarakan.

While we have received many glimpses of the film in the past, this one is the first time where we will get to see the sizzling chemistry between Athiya Shetty and Arjun Kapoor. Sharing it on his Instagram page, Arjun added, “Hello & satsriakaal from Charan & Binkle !!! #Mubarakan #candid #photobooth @theathiyashetty @sonypics_prods @SnehaRajani @ashwinvarde @MuradKhetani @abazmee.”

Arjun Kapoor also shared an interesting story about the photoshoot where he revealed that it was quite spontaneous. He stated that Athiya was fooling around the sets and that’s how they decided to use this as the first look for their characters. Agreeing to the same, Athiya added that instead of a quintessential romantic first look, this one was closer to the feel to the film. According to her, this crazy photoshoot represents the maddening atmosphere of the comic caper.

Let us remind you that Mubarakan has Arjun Kapoor playing a double role of Karan and Charan Singh wherein the second Arjun is also paired with Ileana D’Cruz. The film, directed by Anees Bazme also stars Anil Kapoor in a prominent role and is slated to release on July 28, 2017.