Bollywood singer Shalmali Kholgade has tied the knot with her long-time boyfriend, Farhan Shaikh, in a private ceremony at her house with only her family and some close friends. The nuptials took place on November 22. The two will be throwing a big party to celebrate the wedding union on December 1 in Mumbai. 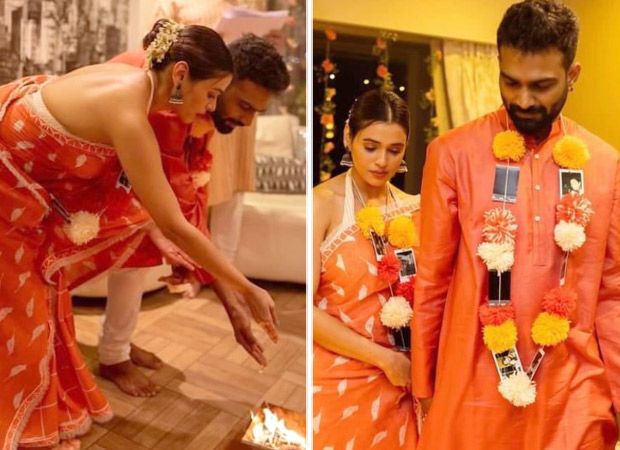 The simplicity of the ceremony was admired by people on social media. “What a beautiful ceremony,” wrote one, while another said, “No Bollywood razzmatazz, such a graceful wedding.”

Shalmali was outfitted in a beautiful orange saree with a bird motif and Farhan wore an orange kurta for the marriage ceremony. Their wedding garlands were quite interesting as they were made of orange and white pom-poms and photographs of the couple.

Singer Shalmali Kholgade and her husband Farhan Sheikh’s intimate wedding at home took place as per Hindu ceremonies. The two were all smiles as they posed for their first photos after getting hitched.

The newlywed couple have been in a relationship for over six years before getting married. Shalmali and Farhan always wished to have a low-key ceremony. They preferred to keep their big day private and minimalistic. The initial plan was only to have a registered wedlock, but they eventually also went in for some traditions at their home for the convenience of their parents.

Also Read: Freida Pinto reveals that she secretly got married to boyfriend Cory Tran, says ‘we got married, went home, took a nap’