Last Updated 19.10.2021 | 10:39 PM IST
feedback language
follow us on
Bollywood Hungama » News » Bollywood Features News » Sidharth Malhotra and the team of Shershaah share this frame-worthy photo with the Gurkha Rifle Regiment, all the way from Palampur!

After completing the Delhi-Chandigarh schedule, a busy Sidharth Malhotra has taken Shershaah, the biopic on Vikram Batra, to Palampur, a small town in Himachal Pradesh. Besides its scenic locales, the place also has a renowned military base where Sidharth is seen shooting currently. The team of the film recently seems to have bonded with the Gurkha Rifle regiment at Palampur and shared this frame worthy moment with them. 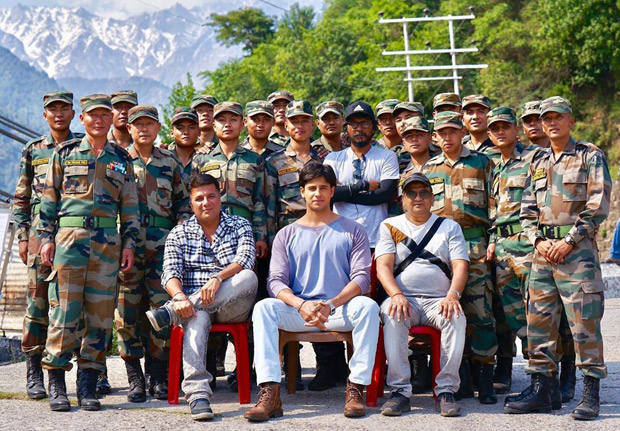 Writer-producer Shabbir Boxwala took to Instagram to share this photo of the team at the Palampur army camp. In this post, Shabbir, in his post, expressed his gratitude towards the Gurkha Regiment for their support and co-operation.

Speaking of this picture, what caught our attention was the look of Sidharth Malhotra where he is seen looking quite young and definitely he seems to have left many intrigued with his new avatar! The actor too posted another picture from their Palampur schedule and here’s the glimpse of the same.

Shershaah, directed by Vishnu Vardhan, is expected to feature Kiara Advani as the leading lady who plays the role of Captain Vikram Batra’s fiancé. Sidharth Malhotra will be seen in a dual role where he will also play the role of Vikram’s twin brother in the film.

For the uninitiated, Shershaah is the story of a Kargil War Hero Vikram Batra who was called Shershaah, the Lion King by Pakistani army men after he showcased his bravery and valor at the Kargil war.