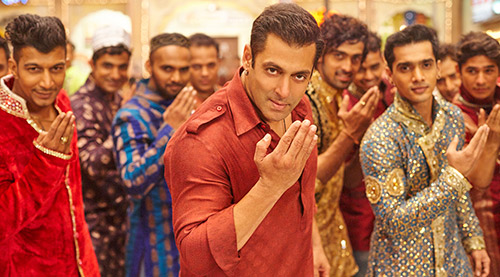 "The advice that Salman sir gave me is that Acting mat karna," says Sooraj Pancholi who makes his debut with Hero in September this year. It is ironical that the man who asked his protege not to 'act' and concentrate on the smart fitting of the Jeans he wears, is actually being lauded as worthy of winning the prestigious National Award for his spellbinding performance in Kabir Khan's Bajrangi Bhaijaan. So, does Salman Khan deserve the National Award for best actor?


Well, it is too early to say whether Salman Khan deserves the National Award for the year is still young and there can be some brilliant performances in the pipeline in the months to come. He already has stiff competition from his costar Nawazuddin Siddiqui who has delivered a stupendous performance in Badlapur and if the promo of Manjhi The Mountain Man is anything to go by then Nawaz seems to be having another killer performance in that film which can earn him a National Award for best actor.


It would be frivolous to predict who shall win National Award at this stage of the year but going by the emotional chord that Salman's character strikes in Bajrangi Bhaijaan he surely seems worthy of being one of the candidates for winning the prestigious award. A film that strikes gold at the box office need not always be 'all sound and fury signifying nothing'. It has been proven by the critical response to both Bahubali as well as Bajrangi Bhaijaan. Both critics as well as the audience have been wowed by the single minded devotion of Salman in staying true to his character in the film.


Director Kabir Khan breaks the formula that distributors traditionally like to associate with in a Salman Khan film. There are two brief action sequences, no item songs and a short lived romance that doesn't drag the proceedings. When Bajrangi sheds tears, the audience fumbles for their handkerchiefs as well, if he believes in honesty, you could see the enormous earnestness on his face, his bonding with angelic Harshali is so real that you effortlessly push the button of 'suspension of disbelief'. Most importantly, Salman surrenders himself to his director's vision. The magical Nawazuddin is allowed to flourish, which in turn enhances the performance of Khan, making it that much more, larger-than-life. The emotional Tsunami that
he triggers along with Harshali in the climax leads to giant waves of tears rocking the entire cinema hall.


It will always be debatable as to who deserves a National Award. The popular films are mostly looked down upon just because they are meant for mass consumption and hence must have 'compromised' on 'artistic merits'. It is a myopic way of looking at Art. The impact that Salman's Bajrangi is having on the collective consciousness of both India as well as Pakistan is nothing
short of Historic. People are already raising voices for the need of people-to-people contact between the two warring nations. Somehow this change is happening because of an excellently made film with right intentions, and the change has also been felt because of the intense honesty that one observes in Bajrangi's madness. Aamir Khan doesn't praise easily. He would rather not say anything if he doesn't like something rather than tweeting quid-pro-quo type of false stuff. Aamir considers Bajrangi Bhaijaan as Salman's best performance and the best film that Salman has ever acted in. It means a lot. Now whether the faith of people, film industry and the critics results in a National Award for Salman is something that one needs to wait for. As of now, Khan is busy winning accolades of humanity. And that is priceless.