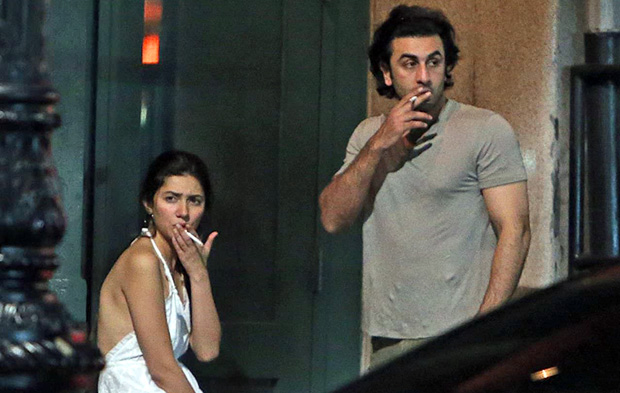 Just a day ago, photographs of Ranbir Kapoor and Pakistani actress Mahira Khan spread like wildfire and pretty much broke the internet. The two of them were hanging out in New York City and having a conversation over a smoke. The speculations around Ranbir Kapoor and Mahira Khan dating began when they met in March this year at the Global Teacher Prize Ceremony in Dubai. They were the guests and walked the red carpet together.

On Friday, after their photographs went viral on social media, the Pakistani actress Mahira Khan was subjected to slut-shaming over her backless dress and smoking with Ranbir Kapoor. Mahira was wearing a backless white summer dress while hanging out with Ranbir outside a restaurant.

Reacting to this, Pakistani fans went crazy seeing Mahira Khan smoking in public and wearing a ‘provocative’ backless dress. The fans were quick to express their displeasure and slut-shamed Mahira Khan for the same. Not only did they slut shame her, trolls judged her character for choosing to smoke.

mahira khan totally ruined her decent image with this. so disappointed.

I actually feel sorry for her. She looks lost & misguided. And no one will let her live this one down.Fallen from grace & hard???? #MahiraKhan pic.twitter.com/7cfEdJ8bRF

Mahira Khan is so fucking overrated and annoying.

I feel sorry for Mahira Khan! Only one question: Are u a Muslim?@TheMahiraKhan #Muharram pic.twitter.com/NCm52vu0Ke

sory but how are u representing an islamic country infront of a non muslim country shame on u???????? pic.twitter.com/ga5Q1Zqhe1

Mahira Khan looks like a proper hoe in those pictures tbh.

Well, soon after, Pakistani actors like Ali Zafar, Humaima Malik and Osman Khalid Butt stepped in support of their fellow colleague and friend Mahira Khan. Ali Zafar, who has worked in several Bollywood films, wrote a note bashing the people who shamed Mahira for her choice of clothing. He said that every woman has the right to do her own thing as long as she isn't hurting anyone.

Osman Khlid Butt, who has worked with Mahira Khan before, recreated those NYC leaked pictures with his friends to mock the trolls. He came in support of his friend and called out the trolls for their perverted comments.

Jesus. Can we please give @TheMahiraKhan a break?! Why are we so quick to judge and attack?! Esp if it's a woman in question. It's her life!

Im assuming those bashing @TheMahiraKhan are saints & would happily put every moment of their lives up for scrutiny. To each their own guys!