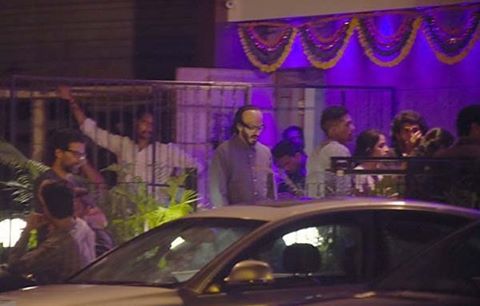 Although his debut Mirzya failed to make an impression, Harshvardhan Kapoor has decided to move on with the vigilante drama Bhavesh Joshi. After many setbacks, the film finally went on floors last year and now a new look of the actor has surfaced online.

Leaving everyone shocked, Harshvardhan Kapoor goes a step further in this new avatar where he looks much older to his real age and completely unrecognizable. Half bald with beard, nerdy specs and sporting a fake paunch, Harshvardhan was spotted on the sets of his forthcoming film Bhavesh Joshi and the picture of the same has gone viral on the web. However, the details of the look are currently being kept under wraps.

On the other hand, of late, there have been several speculations about the film moving into the backburner. Prior to Harsh, names of several actors starting from Sidharth Malhotra to Imran Khan, were associated with Bhavesh Joshi. Further, there were also rumours that the film may face financial trouble.

However, this new look and looking at the actor’s dedication for his character, all the speculations have been put to rest. In fact, Harsh has undergone extensive action training for the film including Makgic Burat. Directed by Vikramaditya Motwane, Bhavesh Joshi is produced by Phantom Films in association with Eros International.

7 Shocking facts about the Rishi Kapoor and…

Harshvardhan Kapoor flaunts his bare back…