Yash Raj Films’ Shamshera starring superstar Ranbir Kapoor and the gorgeous Vaani Kapoor is an adrenaline-pumping action entertainer which is set to release in IMAX in Hindi, Tamil, and Telugu on July 22, 2022. Directed by Karan Malhotra of Agneepath fame, the film is highly anticipated because it marks Ranbir’s return to the cinemas after 4 years since Sanju’s release. Vaani and Ranbir’s pairing is one of the freshest jodis to hit the screen in 2022 and she reveals that her character ‘plays an important role in building the narrative’ of Shamshera. 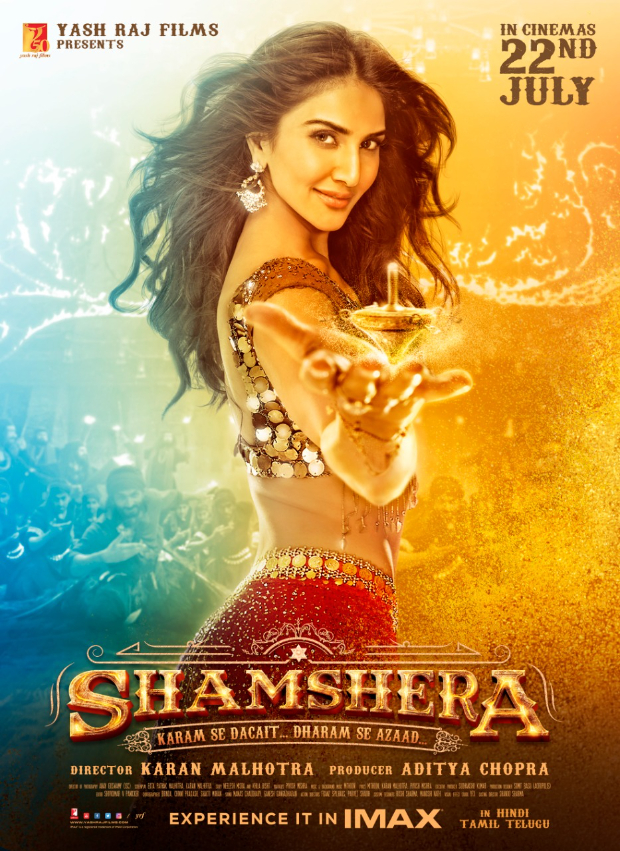 Vaani says, “I play the character of Sona, the most sought-after travelling performer of India in the 1800’s. I have always chosen roles where my character pivots the script in a certain direction and in Shamshera too, Sona plays an important role in building the narrative. I’m thankful to Karan Malhotra for seeing me in this role. He held my hand at every step of the way and guided me to bring Sona to life.”

About her character, Vaani reveals, “Sona has strong will power, she’s confident, a go-getter yet has her own emotional vulnerabilities. She’s definitely one of the most refreshing characters I have played on screen. I’m amazing teaming up with Ranbir Kapoor - a powerhouse of talent. He’s truly a very special actor and my personal favourite.”

The story of Shamshera is set in the fictitious city of Kaza, where a warrior tribe is imprisoned, enslaved, and tortured by a ruthless authoritarian general Shudh Singh. This is the story of a man who became a slave, a slave who became a leader, and then a legend for his tribe. He relentlessly fights for his tribe's freedom and dignity. His name is Shamshera.

The high-octane, adrenaline-pumping entertainer is set in the 1800s in the heartland of India. It has the big promise of a never-seen-before Ranbir Kapoor, who plays Shamshera in the film! Sanjay Dutt plays Ranbir’s arch-enemy in this huge casting coup and his showdown with Ranbir will be something to watch out for as they will ferociously go after each other with no mercy.