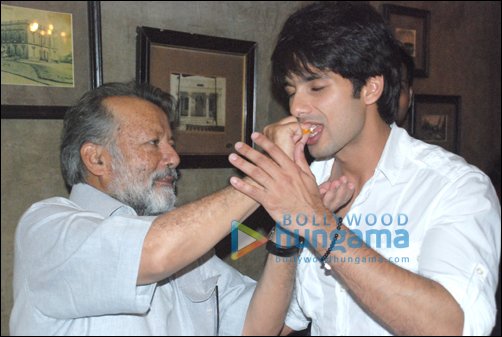 Shahid Kapoor requested and got the one gift for his father's birthday that the older Kapoor most craved for. A day off from the shooting and post-production of Mausam.

Says a source, "What Pankajji really wanted was not a party. That was the Mausam producer Sheetal Talwar's idea. Pankajji loves to spend his birthday every year with his wife Supriya Pathak and children. This year it seemed impossible because his directorial debut is reaching completion. It was Shahid who requested the producer. All work came to standstill on Sunday when Pankaj Kapoor spent his birthday in the way he enjoyed the most."


The night before at the party hosted by Mausam producer Sheetal Talwar, Shahid made sure his father had a good time.


On Saturday night to bring in Pankaj Kapoor's birthday bash thrown by producer Sheetal Talwar at the Pali Village Cafe, Shahid Kapoor wouldn't leave Sonam Kapoor's side from the minute she walked in.


Says a source, "Sonam actually wanted to beg off from attending the party. She had done two shifts that day for Mausam in the morning and Players in the afternoon and was really tired. But Shahid insisted she come for a while at least as it was his father's birthday. Sonam walked in late in the night and stayed almost till the end of the party. Shahid played the perfect host with her. He was by her side throughout. He was seen trying to entertain her throughout. Though they never had any drinks, they were constantly laughing and joking and entertaining one another."

Significantly, says the eyewitness, Sonam was the only guest that Shahid saw off to her car. "We were having the party for Pankajji on the first floor. Shahid insisted in accompanying her down to her car. He returned to the party only after she drove off happily."