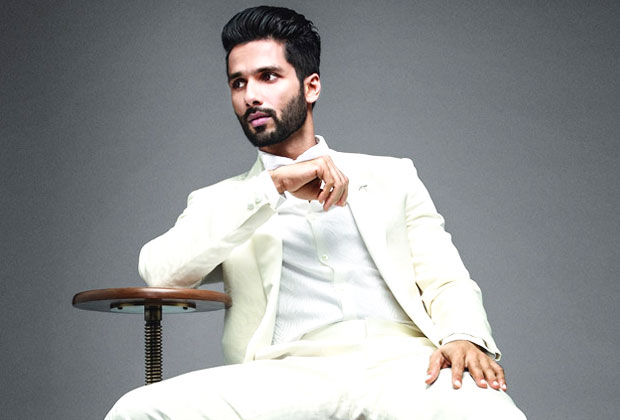 Speculations about Padmavati have been hovering around ever since its inception. From the return of the popular on screen couple Deepika Padukone and Ranveer Singh to the alleged rift between the two heroes of the film Shahid Kapoor and Ranveer, Padmavati has been making news.

Shahid Kapoor however shunned the rumours about a cold war with Ranveer Singh and maintained that its great film with three great characters. Terming these rumours as absurd, the actor went on to state that these content only provides excitement at a frivolous level and their only focus is to create a great cinematic experience for the audience through this film. He also expressed his happiness over the casting and also about the fact that it is getting made in such a grand manner.

When a journalist questioned about his attire, Shahid replied in a tongue-in-cheek manner saying, “Abbey Raja aise lagte the. Three days before I launched a brand called Skult and I’m wearing that. Why would I come like Raja Rawal Ratan in MAMI?”

Besides that a few other interesting tidbits that the actor made during his stint at MAMI include:

His fear of making relevant films: “What kind of films will be relevant and the future of cinema after five years. That is my biggest fear that if I am doing a film and by the time it releases what if such films have already been done before the release. I think every actor goes through this in his life. I would love to discuss about such topics.”

Being born in an artistic family: “I have spent my life amongst artists since both my parents were artists. I have spent my childhood in and around Mandi house in Delhi since my mom (Neelima Azeem) is a Kathak dancer and also spent a lot of time in NSD, doing workshops with Naseer saab since my father (Pankaj Kapur) was from there. That’s the way I got exposed to cinema.”

His childhood brush with iconic filmmakers: “I had once asked my dad who was Kurosawa when I saw his poster at my residence and he had explained that he was a great filmmaker. That’s the benefit of belonging to an artistic family.”

Some of his favourite films: “May be Haider and Udta Punjab are a breakthrough amongst films that work.”

Shahid Kapoor hasn’t seen Rangoon as yet: “I am very nervous about Rangoon and I just asked Vishal Sir that I want to see the film. I haven’t seen it as yet.”