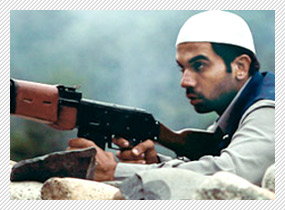 Hansal Mehta's bio-pic Shahid on the slain lawyer Shahid Azmi has been postponed from February to April .With Kai Po Che doing well, its lead actor the talented Rajkumar Yadav who plays the title role in Shahid is suddenly being watched closely.


And therein hangs a tale. Apparently, producer Sunil Bohra and director Hansal Mehta played the wait-and-watch game to see how well Rajkumar was received in the film, so that there would be an enhanced interest-level in Yadav's astonishing turn as the real-life TADA detainee who becomes a crusader lawyer fighting legal battles for TADA detainees after being released from imprisonment.


Says producer Sunil Bohra, "It's not like we were waiting and watching. Because we're very confident of Rajpal's performance in Shahid. It will get him the National award for sure. But yes Kai Po Che is a visible product. It has made a great contact with the youth. In our country, films about male bonding get immediate attention. Any film based on a real-life hero is considered boring .Though Shahid is anything but a dull plodding bio-pic. In fact my director Hansal Mehta has made it like Life Is Beautiful. But like I said Kai Po Che has brought Rajkumar Yadav into the hero's league. Though Sushant Singh Rajput had the author-backed role, Rajkumar is the silent scene stealer."


Bohra admits the film is being held back because of Kai Po Che. "Yes, we were waiting for Kai Po Che. It's given a boost to Rajkumar Yadav's mass appeal. He is the only one who has a romantic angle in the film. And he's brilliant."


Says Rajkumar Yadav, "I haven't had so many favourable responses for any of my earlier works. I am now looking at several projects. This is the best time of my career so far."


Recently, Shahid was cleared with an 'A' certificate by the Central Board Of Film Certification. Says the jubilant producer, "Such a hard-hitting subject and not one cut was ordered. We got an 'A' certificate without a single cut."