Well, we all know about the witty sense of humour that Shah Rukh Khan has. And not surprisingly, fans often get a dose of the same on Twitter whether it is his posts or his interaction with them. Of late, the conversation that has attracted attention on the platform is the one the superstar had with Twitter CEO Jack Dorsey and it was definitely a fun one! 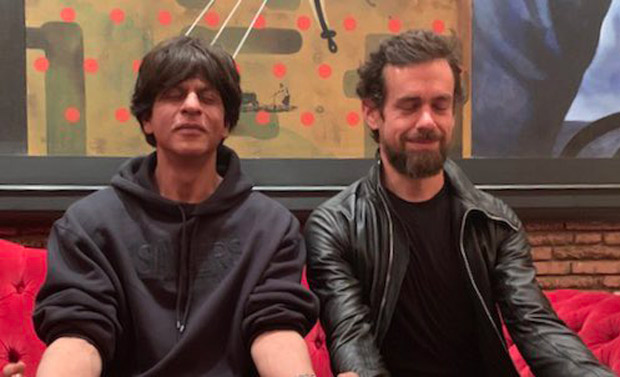 Twitter CEO Jack Dorsey is currently relishing his trip to India and he has been sharing the shenanigans on his handle. After having a conversation with our honourable Prime Minister Narendra Modi, Jack came to Mumbai and landed up at the residence of our beloved superstar Shah Rukh Khan. But before arriving there, Mr. Dorsey had a fun chat session with the superstar on the said platform. He started off the conversation by asking if SRK was awake and the superstar, not surprisingly, had a quirky response right up his sleeve. He said, “Up and Ready. And shockingly on time...if anybody has warned u about my tardiness they r just spreading ‘fake news...’” Here’s a glimpse of the tweets:

Up and Ready. And shockingly on time...if anybody has warned u about my tardiness they r just spreading ‘fake news...’ https://t.co/LE9ybOyJ3K

Followed by that, Jack Dorsey shared a picture of the entrance of Mannat. And well, what followed was the picture that has now gone viral on the internet. It featured Shah Rukh Khan and Jack Dorsey sharing a yoga pose. We wonder if the Bollywood superstar took on the role of a yoga guru for the CEO of Twitter! But whatever be the reason, Shah Rukh Khan fans are super thrilled about it.

Interestingly, they were also left surprised to see their idol in Mumbai. Reason? Reports had it that Shah Rukh Khan was invited to Italy by Deepika Padukone to attend her much talked about wedding with Ranveer Singh. However, it seems that he stayed back at home to meet the ‘King of Social’ like he referred to him on Twitter. The superstar shared the picture on Twitter and here’s the post:

Today @jack made me realise with his calm demeanour & composed, nearly meditative mindset...’that all Work and no Pray, would make Jack a dull boy.” Thx for dropping in & also team @Twitter for a lively evening. Have a happy stay in India. pic.twitter.com/melFfe8NKJ

Also Read: Shah Rukh Khan CONFESSES that he can’t afford to have Gauri Khan to design his films and here’s why