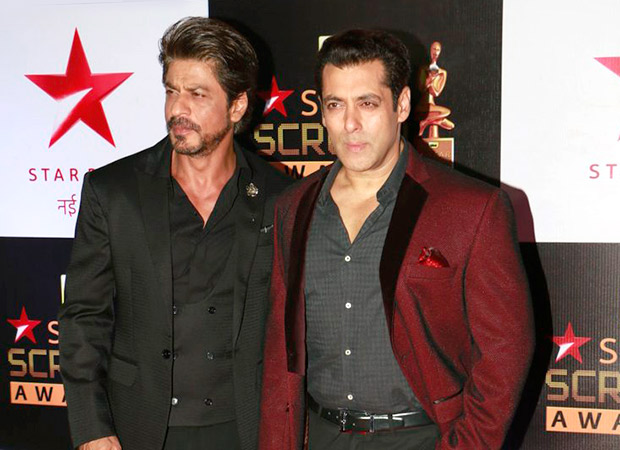 There will always be debates and question marks on the credibility of who should have won at a popular award function. But the entertainment value and to witness so many big stars converging under one roof is a veritable treat. Star Screen Awards were held last night in Mumbai a month before the curtains will be drawn on 2016. Films like Befikre and Dangal have still not released and were obviously not in contention which is unfair. The award show will be telecast on television on December 31. And it will be one hell of entertainment for millions all across the globe.

Salman Khan and Shah Rukh Khan hosted a fun segment which was undoubtedly the biggest highlight of the evening. First Salman walked in singing 'Main Hoon Hero' from Hero. He sang it live and he sang it really well. Later Salman and SRK cycled their way onto the creatively mounted stage. Salman announced at the outset that he will watch Aamir Khan's Dangal first day first show. Shah Rukh shared his thoughts on the time when Salman and SRK had differences and were not on talking terms. Both the superstars stated that there were people who used to come to them with conspiracy theories but they never encouraged anyone who came to them with gossip stories. Salman said that he has got married several times but only in his dreams. As they watched a clip from Karan Arjun, SRK wiped sweat from Salman's forehead. The duo later danced to 'Ye Bandhan To Pyaar Ka Bandhan Hai'. They addressed the media on the red carpet and it was a once-in-a-lifetime opportunity for media to speak to the two iconic superstars. The theme for the evening was 'Friendship and fraternity'

Rekha ji received lifetime achievement award from Deepika Padukone. Sonam Kapoor looking lovely in a green traditional dress escorted Rekha ji on to the stage. What followed was sensational as Rekha ji brilliantly danced to 'Pardesia' from Mr Natwarlal. Mr Bachchan was in the audience and the television cameras quickly grabbed their money-moment that will be highlighted in the Promos again and again. Salman Khan brought the proceedings to an end as he put up a spirited performance to bring in 2017. His performance included his popular songs of the recent times from Sultan and Bajrangi Bhaijaan. He arrived on a tractor type vehicle, turned into a DJ on stage and then once again went into the crowd, moved around on an open vehicle and brought the evening to a thunderous end. He urged the people to spread love and respect.

Another big highlight of the evening was a hilarious 'Khatiya with Karan' session where gorgeous Deepika Padukone answered some spice laden questions of Karan Johar. Karan Johar and Karan Singh Grover were the hosts for the evening. Karan Johar enjoyed himself while Grover opened up gradually after a stiff start. Grover also took off his shirt to display his perfectly chiselled body. Tiger Shroff put up a superlative show. He somersaulted his way on to the stage after an aerial entry. He was a picture of perfection and poise. He somersaulted his way back amongst the audience and got Sushant Singh Rajput and Varun Dhawan to shake a leg with him. Disha Patani, Tamannah Bhatia and Zareen Khan put up inspired performances as well.

Alia Bhatt gave an emotional speech after winning best actress award in the popular category. Mr Bachchan dedicated his best actor award in the popular category for Pink to his daughter Shweta who was present in the audience. Varun Dhawan won the award for best actor in a comic role. He said that his dad would be happy because it is an award for comedy. The social media was abuzz late in the night with fights amongst fans and the winners getting trolled.

I was thoroughly entertained and most importantly it was great to see the film industry bonding amongst each other. After the mainstream media spread reports a few months back about the divide within Bollywood, the fraternity put up a solid united front. There was not a single mention of demonetization. Karan Johar and Alia Bhatt almost brought up the topic but decided to skirt the issue as one doesn't know who may get offended and why. There's no place for politics in entertainment industry and it is best that political minded people should just stay away.