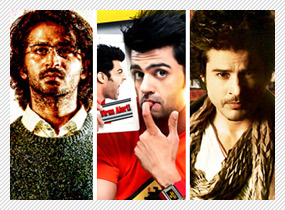 Some bad habits just don't die. One such bad habit prevailing in Bollywood is for multiple films to arrive on a given Friday, despite well knowing that traditionally, audiences have an appetite for watching at most two flicks in a week. Still, next week, there would be as many as - hold your breath - seven films hitting the screens. This is not to count some Hollywood as well as other regional language films that would arrive alongside as well.


Confirms a trade insider, "Yes, at last count, there are films like Satya 2, Mickey Virus, Sooper Se Ooper, Ishk Actually, Amdavad Junction, Wake Up India and Huff! - It's Too Much releasing on October 25."


The huge rush is due to the festive season starting from November 1, onwards, which would see the arrival of Krrish 3, Ram Leela, Gori Tere Pyaar Mein, Singh Saab The Great, Bullett Raja and R... Rajkumar till 2013 climaxes with Dhoom 3.


"With each of these biggies expected to arrive anywhere between 2000-3500 screens each, it is practically impossible for smaller films to arrive. Hence, those who wish to close their books before year end have no other alternative but to arrive next week," the insider says. "For most of them, it is suicide though," he adds.


Amongst the releases this weekend, the biggest of them all is Satya 2 which also has the most notable director at the helm of affairs, Ram Gopal Varma. He is confident about his film's prospects though and has already planned a series of special screenings before it arrives in theatres.


On the other hand the makers of Mickey Virus have no qualms in admitting that in the season of 'Big Boss' and Boss, their film is an underdog. To make the best out of their relationship with celebrities, they have picked Salman Khan, Anil Kapoor, Madhuri Dixit, Farah Khan, Karan Johar, Ranbir Kapoor and Kapil Sharma no less to help endorse the film through a specially designed campaign.


As for Sooper Se Ooper, the film's composer/singer Sonu Nigam has taken it upon himself to ensure that there is some deal of promotion around it even though the producers (Reliance) are yet to kick-start any major campaign.


On the other hand, even though the most popular face in Ishk Actually, Rajeev Khandelwal, is conspicuous by his complete silence on the film, the other lead Raayo Bakhirta - seen earlier as Chaudhary in Pyaar Ka Punchnama - has taken it upon himself to create awareness around it. When quizzed around the relative low key promotion so far, Raayo shrugged, "These are new producers. We are all trying our best."


Meanwhile, a bunch of character artists have come together for a film Wake Up India which has its theme centered on a Chief Minister being accused of rape. There is no information whatsoever though on two other films that are arriving out of nowhere - Amdavad Junction and Huff! - It's Too Much.


Well, at least a film is actually staying true to the title - It is indeed 'Too Much'!