Ethereal beauty Manushi Chhillar is definitely a multi-talented girl. While shooting on the sets of Prithviraj, Manushi showed us a glimpse of her doodling skills as she revealed a very important clue about the character of her debut film, princess Sanyogita! 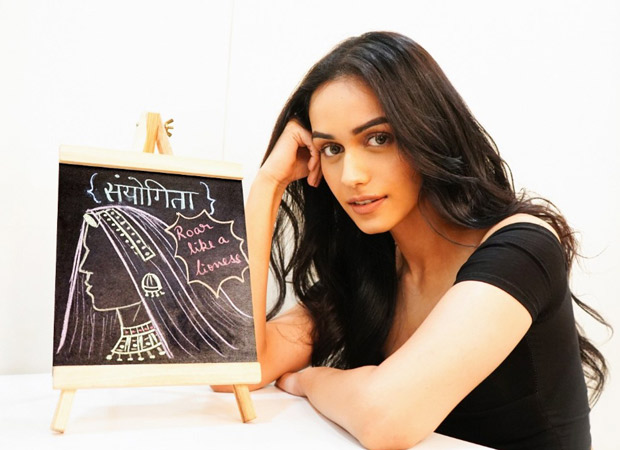 Just to refresh, the gorgeous Miss World 2017, Manushi, is the leading lady of YRF’s biggest historical film Prithviraj, based on the life and heroism of the fearless and mighty King Prithviraj Chauhan. The YRF big-budget entertainer features actor Akshay Kumar in and as Prithviraj, and Manushi plays the role of the breath-takingly beautiful princess Sanyogita, the love of the king’s life. Manushi has been one of the most sought-after new faces in Bollywood and the 22-year-old stunner is getting the grandest launch that any newcomer has seen in recent times.

Manushi says, “I have been into doodling for some time now and it’s something that I do to explore my creative side whenever I get a chance. I travel with a cute blackboard and chalks to the sets and in the breaks, I like to doodle. From the time my director met me, he told me that remember ‘you are princess Sanyogita – you should roar like a lioness!’ and this stayed with me and I have tried to channelise my director’s vision on the sets. It is a very powerful line. It shows the resolve, the spirit, and courage of Princess Sanyogita and it made me understand how I have to depict her and her life on screen.”

Taking the director’s instruction with me wherever I go. #Sanyogita #Prithviraj #TerminalChhillar

Manushi’s Bollywood debut is being directed by Dr. Chandraprakash Dwivedi who directed the biggest television epic Chanakya – based on the life and times of the most influential political strategist of India and the multiple award-winning Pinjar. Prithviraj will release worldwide in Diwali 2020.

Also Read: “My training in classical dancing has definitely helped me for Prithviraj” – says Manushi Chhillar