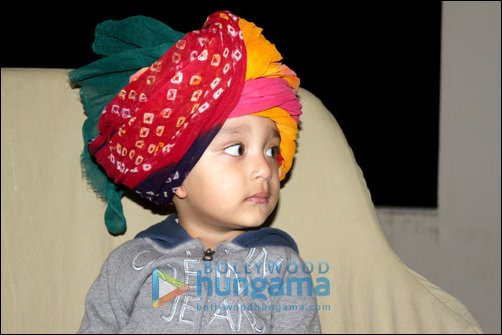 Sanjay Dutt, who is busy shooting for Rajkumar Hirani's PK in Rajasthan, had a surprise visit by his wife Maanyata and kids a few days back. Though Dutt was visibly elated on seeing his family, it was his son Shahraan who stole the lime light when he insisted on wearing a turban similar to father dearest.

The father-son duo sporting similar colored turbans painted a perfect picture that compelled director Hirani to film them together for a few shots. However, it's uncertain if these visuals will make it to the final cut of the film.


P.K., which features Aamir and Anushka Sharma, in addition to Sushant Singh and Sanjay Dutt is slated for release next year.