Last Updated 17.10.2021 | 12:06 PM IST
feedback language
follow us on
Bollywood Hungama » News » Bollywood Features News » Sanjay Dutt is back in Mumbai from Dubai; gets a new hairdo for his next

Actor Sanjay Dutt and his wife Maanayata Dutt recently flew off to Dubai to have family time with their kids. After spending the entire lockdown in Mumbai while Maanayata & the kids were in Dubai, Sanjay reunited with them. The Sadak 2 actor, who has been diagnosed with cancer, did his preliminary treatment in Mumbai. Now, he is back in Mumbai to resume some of his pending shoots. 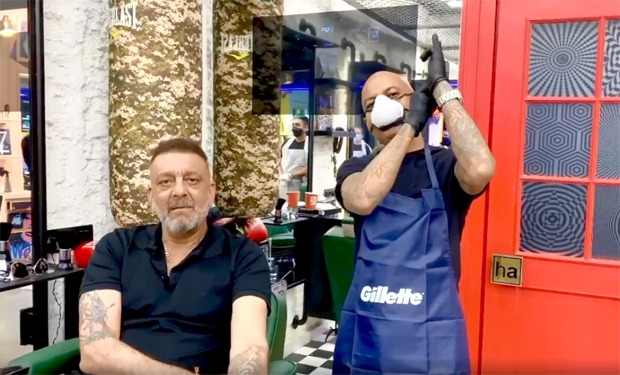 On Wednesday, Sanjay Dutt was seen leaving a salon after getting his new look done by celebrity hairstylist Aalim Hakim. The actor was all smiles for the paparazzi. He wore a mask and was dressed in casuals.

My day just got better with @duttsanjay entering our Salon HA... It’s always such a delight to see him but today was something else.... A whole lot of emotions caught up as we go a long way and share such beautiful memories together.❤️ Sanjay Dutt at Salon Hakim’s Aalim after getting a haircut done with all the necessary precautions Instructed by the government and the experts. #SanjayDutt #AalimHakim #Rockstar #SalonHakimsAalim #TeamHA #SafetyFirst #Precautions #Hygiene #SocialDistancing #NewNorms #TeamHakimsAalim #SalonLife #Viral #Trending #MovieLife #razorcuts #ActorsLife #fighter #warrior #babarocks #friends #menshair #mensfunkyhairstyle #funkyhaircolouring #legacy #habarberingcompany???? @duttsanjay @aalimhakim

Sanjay Dutt will be resuming shoot for the Yash Raj Films' big-budget historical Prithviraj post-Diwali! The details have been revealed according to reliable trade sources. A trade source revealed earlier, “Sanju has finished 85-90 percent of Prithviraj shoot already and he has just 5 to 6 days of shoot left. He has finished maximum portions of principle photography and he will be resuming the Prithviraj shoot immediately post Diwali. He has been a rockstar as he is finishing all his shooting commitments. The makers are planning this shoot basis this time window and will wrap up the entire film immediately.”

On the work front, Sanjay Dutt will also resume work on Bhuj: The Pride Of India and KGF: Chapter 2.